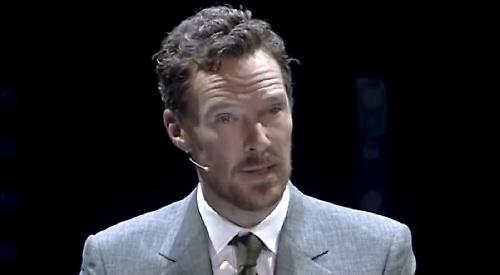 THE mother of a soldier who was killed in Afghanistan more than 10 years ago says it was an honour to have his final letter home recited publicly by Benedict Cumberbatch.

Helena Tym said the words of her son Cyrus Thatcher took her breath away when they were read aloud by the film and TV star at the Royal Albert Hall in London.

Cyrus, who was 19, was serving with the 2nd Battalion, The Rifles, when he died in an explosion on June 2, 2009, while on patrol in Helmand Province.

The letter, which was written to be read in the event of his death, formed part of a Letters Live event, which celebrates the power of literary correspondence from around the world.

Miss Tym, 60, of Henley Road, Caversham, said she had only heard the letter read aloud twice before, once by her youngest son, Steely, and once on the radio.

She said: “To hear Benedict Cumberbatch read it, it was difficult to listen to, but it was also very, very moving and obviously we are immensely proud of Cyrus and what he achieved in his young life.

“It was very strange because Cyrus had a strange way of saying things. Listening to it, and hearing Benedict read it, it was definitely Cyrus coming through. It was fantastic and a real honour for him to read it and we were immensely proud of that.”

Cumberbatch, star of TV’s Sherlock and the film Dr Strange, among many other roles, spoke from a podium on stage.

On several occasions, it was obvious to the audience that the actor was affected by the words. He received a round of applause upon finishing.

Miss Tym, who works as a carer, said: “I have heard since that he went back to his dressing room and had a bit of a moment.

“In a way, that’s a good thing, if people are affected by it, that’s the important thing. The words do resonate with a lot of people. There are grown men who wouldn’t say what Cyrus said in his letter at his age.

“I have only ever read the letter once but I do know it, it is tattooed on my memory. It never goes, it is always there. I suppose it was a bit of a shock hearing someone else read those words and you think, ‘Oh god, my son wrote that’.

“It was a mixture of pride and shock, but not in a bad way — it just takes your breath away again. It is strange to hear the words you have not heard for a long time. It is like a recurring nightmare.”

Letters Live is a series of events inspired by the author Shaun Usher’s book Letters of Note. High-profile performers from various disciplines are invited to read letters out loud to an audience.

Miss Tym, who was widowed shortly before the event, attended with Steely and his wife, Cyrus’s best friend David May and his mother. Her other son, Zac, had a prior engagement.

She said: “It was really interesting. There were lots of modern letters, some were funny, some were poignant and some were a bit disjointed.

“One went as far back as Genghis Khan and there were some from America. The strapline is ‘extraordinary letters from across the globe’ so it is nice to think that Cyrus’s was extraordinary.”

Miss Tym was asked if the letter could be used just two days after the death of her husband Robin Thatcher, 61, who had been ill with oesophageal cancer, and she readily agreed.

“The other tragedy of this is that Cyrus’s father never heard Benedict read it out loud, which was a great pity,” she said.

“But, as my niece said the other day, ‘Oh look, there’s Dr Strange reading Cyrus’s letter, so it is interesting that he is recognised, even by an 11-year-old girl.

“It was very surreal but it was an amazing experience and I am very honoured that he read it and wanted to read it because I think they can pick and choose.”

Cyrus had sent his family seven letters, which they now keep safe. The last one they received Cyrus had written in case he was killed.

He wrote: “Without you I believe I wouldn’t have made it as far as I have. I died doing what I was born to do. I was happy and felt great about myself. Although the army was, sadly, the ending of me, it was also the making of me so please don’t feel any hate towards it.”

Cyrus described his father as his “idol”, his mother as “perfect” and his brothers as “amazing men” and he asked them all not to mourn him. Miss Tym said that despite the family’s tragedies, they remained strong.

She said: “It has been a very strange three months having lost Rob, Christmas and everything.

“Life is difficult and it continues to kick us when we’re down but we’re made of tough stuff and we will survive it and, strangely, it is comforting when things like this happen about Cyrus.

“Rob and I used to say every New Year’s Day I wonder what will happen with Cyrus this year. It rolls into 2022, even though it was done in 2021. Something always seems to happen. Cyrus’s name seems to pop up.”

Cyrus, who attended Micklands Primary in Caversham and the former Chiltern Edge secondary in Sonning Common, didn’t enjoy school but knew it was necessary for the army to accept him. He joined up in December 2007 straight from school.

He was passionate about the army and was described by his senior officers as having “a rucksack full of potential”.

In addition to serving in Afghanistan, he had also completed a tour in Kosovo.

About 1,000 people lined the streets at Cyrus’s funeral, which was held at the Reading Minster St Mary the Virgin Church.

He received full military honours and was buried in a military grave at the All Hallows Road cemetery in Reading.