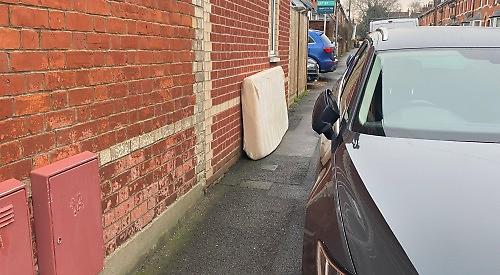 A MAN has called for more CCTV to be installed in Henley after an old bed mattress was fly-tipped outside his home.

Nigel Stevens, 58, said he felt angry after discovering the single mattress leaning against a wall of his home in Greys Road on Monday evening.

He said: “I love Henley — it’s such a beautiful town and we’re really lucky to live here so it was really annoying to find this rubbish.

“I’m really shocked it’s happening around here. The tip is not far and it’s easy to go there and leave your rubbish. I feel more frustration and anger than anything.”

Mr Stevens, who lives near the junction with Albert Road with his wife Shelley and their golden retriever Walter, found the mattress at about 5.30pm. He said: “My wife came home at 4pm and it wasn’t there but when I came home from work it was and I thought maybe someone had left it there temporarily but it was still there on Tuesday morning.

“Someone has clearly driven along the road and left it outside. I’m not happy about it.

“Only a week before someone left a chest of drawers in Greys Road car park near the salt bin — it might be the same person.

“People clearly can’t be bothered or can’t afford the tip. I could dispose of it myself but if I get rid of it the people might see that and think they can dump more stuff down there. The neighbour across the road from me has a camera so we’re going to try to see if we can see who it was.”

Mr Stevens, who has lived in Henley for about two years, said he had also noticed dog owners not picking up their mess.

He said: “I have a dog and I’m a responsible owner but people are letting their dogs poo all over the pavement in town and I think it is getting scruffier.

“I was walking the other day and I slid in a great big lump of poo. It seems people are just dumping their litter everywhere and it’s not on.”

Mr Stevens, who owns a print and design company, suggested that more CCTV should be installed to deter people from littering and is considering installing a camera at his home. “Maybe we need more CCTV in town to stop people,” he said. “I might even put a camera up myself, which I shouldn’t have to do as it’ll cost me a few quid.

“Maybe the council could get some signs printed — I would even do it for them.

“It’s just so cheeky for people to just dump their rubbish outside other people’s homes.

“It’s also the inconvenience for me having to contact the council to get it removed.

“I’m not a moaner and don’t want to complain about things like I have nothing better to do with my time but it’s just not a usual thing for Henley.”