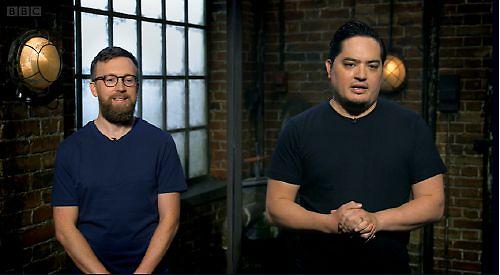 A WINE expert from Henley has teamed up with an online cheese company featured on TV’s Dragons’ Den.

Alistair Cooper is helping
Cheesegeek to select wines to go with the different cheeses it offers as the business aims to become market leader in the £3.2billion UK industry.

He says he enjoys working with the firm’s founders Edward Hancock and Rich Simpson and is looking forward to meeting “dragon” Steven Bartlett, a 29-year-old online entrepreneur who has invested in the business.

The 44-year-old, who lives in Albert Road with his partner Aspen Weatherburn, has worked in the wine industry for 20 years and is a consultant, writer and wine judge.

He agreed to help Cheesegeek last year after being approached by Mr Hancock, who was looking for a master of wine.

Mr Cooper now visits the company’s headquarters in south London once a month to select wines for its range of cheese gift boxes.

He said: “The first time I heard about Cheesegeek was when I went to my parents’ house and my brother had bought one of their subscription boxes and I thought how great it was. As well as being the wine geek, I’m a huge cheese fan.

“A couple of weeks later, I was contacted by Edward as he was looking for a master of wine to build that side of the company. I was very impressed with the brand and when I met Edward I was blown away with the operation.

“It was nice to find someone with the same amount of love and passion for cheese as I have for wine.

“One of the things Edward brought me in to do was help pair different wines with different cheeses.

“We test about 30 to 40 cheeses with different wines and spend the day talking about what works and what doesn’t. Wine and cheese are pretty good bedfellows.”

Mr Cooper, who became a master of wine in 2017, said the secret to pairing wine and cheese was about contrasting or complementary flavours.

“Port and stilton is a classic pairing,” he said. “The port is very sweet and the stilton is salty so they go well together.

“If you’re looking at a creamy cheese, like Bix from the Nettlebed Creamery, you’ll want something to cut through that creaminess so something with acidity or bubbles.

“White wine, especially a Chardonnay, is the best overall wine for most cheeses. A lot of people think it’s red but it’s better to have the bubbles and the acidity from white wine.

“I’m not going to lie, it’s a huge amount of fun but your palette does get tired so we have to be careful with the order we try things in.

“We go from the mildest flavours of cheese all the way through to the strongest because if you start with the blue cheeses then your palette is shot.”

Mr Cooper is now helping the company with a new podcast in which he discusses different pairings.

His favourite is Carménère red wine with a blue cheese such as Bath blue.

He said his family were still fans of Cheesegeek and were delighted when he started working with the business.

“They were all very desperate to get a discount,” he said. “I remember the first thing time I saw the box at their house and how professional and well done it was.

“It was educational, too, but not stuffy and that’s so important. Wine can be seen as being intimidating so it’s important that things are not exclusive and the product provides a lot of information but not too much.

The Cheesegeek founders were featured in the latest series of Dragons’ Den when they pitched for an investment of £150,000 in return for a three per cent share of the company.

Mr Hancock told the “dragons” that there are about 750 varieties of cheese being made in the UK but that most of us could only name up to 10.

He said: “There have been many innovative, tech-led businesses that have revolutionised flowers, craft gin, craft beer [but] cheese has been left behind.

“Within five years, we aim to become the dominant brand within the £3.2billion UK cheese industry and beyond.”

The pair received three offers before accepting the one from Mr Bartlett, the youngest ever “dragon”, who founded Social Chain, a social media marketing agency, which is now said to be worth more than £300 million.

He offered them all the money for 7.5 per cent of the business, which will drop to five per cent if they return all his investment within 24 months.

Mr Cooper said: “I think the dragon they got was the one they had hoped for and it was his first investment.

“Steven has visited quite a few times and I just missed him on the last visit so I haven’t met him yet but I’m sure I will.

“He’s got so much experience to drive the business forward and Cheesegeek does fill a gap in the market.

“The care that Edward and Rich take is insane. They love what they do and the care they put into the business is second to none.

“There will be a new app and I’ll be working with them on pairings for that. It’s so exciting.”