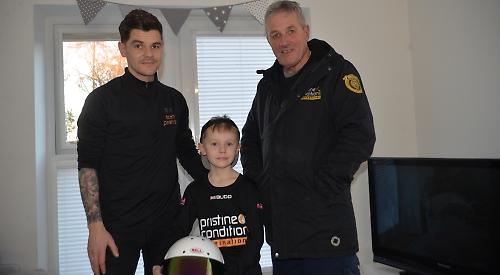 A BOY of seven has become the third generation of his family to take up motor racing.

Freddie Budd, from Henley, has started kart racing and will take part in this year’s Bambino Kart Club championship for six- to eight-year-olds.

He is the son of 29-year-old Charlie Budd, who was a champion racer of classic Minis and now takes part in Legends car racing, driving classic-style cars with motorcycle engines.

Charlie’s father Ralph, 70, has been racing classic Minis since the Seventies and still takes part in a few events every year.

Freddie, a pupil at Sacred Heart Primary School, received his kart as a Christmas present in 2020 but struggled to do much racing last year due to the coronavirus
pandemic.

However, he practises on a simulator at home in Highlands Park, where he lives with his father, mother Sorrell and younger sister Billie, two.

Now his father wants to ramp up his training before he takes part in the BKC championships, which take place at tracks across the country and are streamed online.

Mr Budd, whose brother Dan also races, said: “Last year it was difficult to get out and race so we were mainly having a bit of fun but now we’re going to step it up.

“You can start racing in a kart at five years old but we waited a little bit. From the moment I saw Freddie on the simulator it was obvious he was going to be good at it. Being in the kart as much as you can be is important, so we’ve been trying to find places we can go.

“Between races I’m in a car driving all week, but Freddie’s only in the kart at the weekend, which is why the simulator helps.

“I couldn’t watch his last final. The karts go at 40mph, so it was quite scary watching him.

“We’re trying to generate a bit of support for his racing now and we’ve started some social media pages. To compete costs a lot of money, so we want to get some sponsorship. When he goes to school, they talk about what they’ve done at the weekend, which is mostly football, while we’ve been in Wales or wherever racing.

“Freddie asks to race. We’re not pushing him into this, it has to be his choice. Whatever he wants to do, whether it’s football or ballet, we’ll do it and put 100 per cent into it.”

Mr Budd senior said: “We started by taking him to the Rookie Racing Academy in Lincolnshire where he had his first go in a kart.

“It was so cold and his fingers were hurting. The kart went into the ice and swerved and he turned into the swerve rather than fighting it so it was obvious then that he was going to go to be good.” Freddie said: “I really like racing, more than practiisng. I’m very competitive. I used to like the rain because it slows everyone else down but now I like racing in the dry.”

His father races for the Pristine Condition racing team, which is based in Henley. He previously raced Minis and competed in the Dunlop Mini Se7en Championship, winning the title in 2017.

This year, he and his brother will make their debut at the Legends Cars National Championship.

Mr Budd senior said: “I’ve been racing ever since I could drive. I got in with a group of friends who raced and thought ‘this looks good’ so I started going every weekend. Championships are too many races for me now but I like to take part in five or six races a year.”

His son said: “We all go out to the races every weekend, it’s a family affair.

“My wife comes along and helps out and we’ve developed friendships with other families, so it’s a big group of friends every weekend. My wife’s very understanding about all the weekends it takes up.”