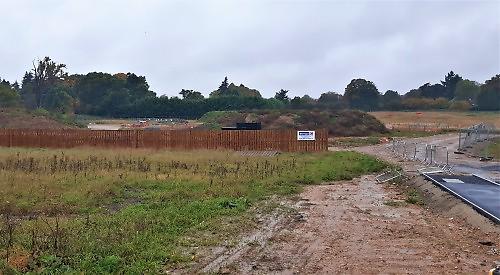 A DEVELOPER has been told it cannot go ahead with the construction of 95 homes near Shiplake without another planning application.

Taylor Wimpey was granted planning permission on appeal in August 2017 to develop land at Thames Farm, off Reading Road, in Harpsden parish.

But now South Oxfordshire District Council, the planning authority, says it must also submit an application for groundworks.

This comes after the company found the land was unstable and vulnerable to sinkholes. It proposed to inject grout into the ground to strengthen the chalk surface but opponents said this was inappropriate in a rural area and could affect the water supply.

Taylor Wimpey argued that it had the right to carry out the stabilisation work under the original planning permission but the council disagreed.

The company responded by applying for a certificate of lawfulness which would have recognised that it would be legal to go ahead with the work but now the council has rejected this.

In a letter to Taylor Wimpey, Adrian Duffield, head of planning, says: “The proposed ground stabilisation works are not authorised by the existing planning permission, they are not part of the foundation works nor ancillary to the development granted.

“They are of a nature, scale and extent that they represent a separate activity of substance and are an engineering operation beyond the construction of foundations.”

Mr Duffield warned that if any work went ahead, the company would be liable to enforcement action.

In a report recommending the decision, the council’s planning officer Emma Bowerman said: “The original approval does not authorise a limitless amount of below-ground development to alter the site to make it available for development.”

She said the planning inspector who overturned the council’s original decision not to allow the development did not intend to authorise the stabilisation works as he was “completely unaware” of them.

Taylor Wimpey has a right of appeal. The decision was welcomed by the Thames Farm Action Group, which represents residents in Henley, Harpsden and Shiplake, opposed to the development.

It had argued that a separate application for the groundworks would allow this to be scrutinised and for the Environment Agency to consider the likely effect.

Peter Boros, who chairs the group, said: “We’re delighted with the decision, which has vindicated everything we have said about this from the start.

“The application sought to avoid the full and proper scrutiny that this type of work must be subjected to. This would have circumvented a system that rightfully exists to ensure applications are carefully and fully vetted. I hope Taylor Wimpey will now give some careful thought to what it does next.”

Kester George, chairman of Harpsden Parish Council, said: “It would have been a scandal if the district council hadn’t stood up to this and allowed the company to use its planning permission to say it has permission for something it doesn’t have.

“The groundworks proposed could affect the water supply.”

Taylor Wimpey said it would continue to work closely with the council, Oxfordshire County Council and Thames Water to find “the best possible solution”.