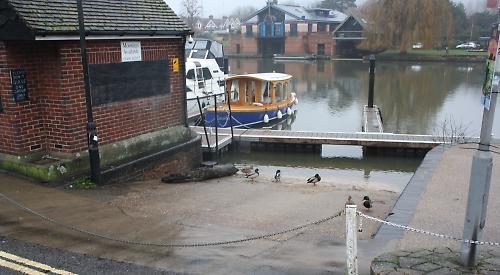 THE Environment Agency is to investigate the lack of access to the River Thames from a restored slipway in Henley.

The slipway at the bottom of Friday Street was reinstated by the town council in December after Sorbon Estates, which owns moorings there, filled it in with concrete without permission in summer 2020 and then failed to rectify this despite requests.

However, the slipway still cannot be used to access the river because the entrance to the water has been blocked by Sorbon’s pontoons. A spokeswoman for the Environment Agency said: “As the navigation authority for the Thames, we share boaters’ frustration with the inadequate access to the slipway and will be liaising with Sorbon Estates regarding the moorings inhibiting this access.”

Town clerk Sheridan Jacklin-Edward said it was in the Environment Agency’s power to revoke Sorbon’s moorings licence and questioned the need for discussion with the company.

He said: “We contacted the Environment Agency, which is the proper authority in this matter, 18 months ago. Henley Town Council fully supports the removal of the pontoons so that the public slipway can be returned to its proper use. We are aware that many river users and local people share this view.”

A Sorbon Estates spokeswoman said: “The pontoons have been in place for more than 10 years and are in constant use, so the land has not been used as a slipway for at least this length of time.

“Sorbon Estates installed the pontoons with permission and licence from the Environment Agency and with full planning consent from South Oxfordshire District Council. We are not aware of any request from the agency to remove them and there are no plans to do so at this time.”

The town council spent £6,000 on removing the concrete and plans to bill Sorbon for the work as the company had agreed to complete the work itself but did not do so.

At the time, Sorbon said it had agreed to draw up concepts to improve the area, arranging visits from technical advisors and instructing architects.