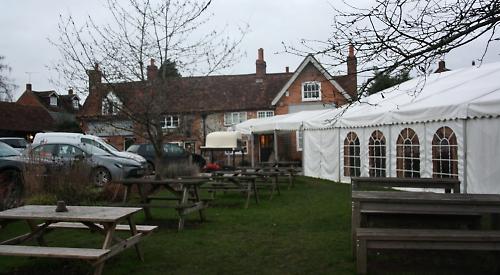 A VILLAGE pub landlord has defended his plans to keep an outdoor marquee despite protests from residents.

Dan Redfern, who runs the Cherry Tree Inn in Stoke Row with his wife Natalie, has applied to South Oxfordshire District Council, the planning authority, to extend the period of use of the 140sq ft structure.

He says that without the marquee, which is at the front of the Grade II listed building, the business would go under due to the financial impact of the coronavirus pandemic.

It was installed in September 2020 after the Government ruled that hospitality venues could have temporary structures to host people outside in line with coronavirus restrictions.

The Government has since allowed these temporary structures to become permanent unless the main building is listed.

Mr Redfern, who bought the lease for the Brakspear pub in April 2018, has had to apply for planning permission as a result.

He also sought consent for a pizza oven that he bought in August but in fact doesn’t need permission for this as it is a “moveable” structure.

Several residents have complained about the size of the marquee and the lack of parking spaces for additional customers as well as the use of a pizza oven due to the noise and smoke.

Mr and Mrs Tozer, of Cherry Tree Close, said: “The pub is a beautiful, archetypal country pub in an Area of Outstanding Natural Beauty and one of the reasons we moved here. Its vista in spring is joyous.

“The overbearing nature of the marquee is not in keeping with the designated status of both the pub and the architectural heritage of the village. The marquee has covered the front vista of the pub, as seen from all approach directions, and removed the amenity of the pub’s beer garden.

“This has in turn changed the character of the village’s main vista and severely detracted from the face of a Grade II listed, quintessential traditional village pub.”

Julie Roberts, of Cherry Tree Close, said: “My home is within several metres of the pub boundary — I do not mean my boundary, I mean my actual bedroom where I sleep.

“The proposal for a large pizza oven just a few metres from my bedroom seems totally unfair and inappropriate. It is wood-burning so will cause smoke and dust and cooking fumes.

“My enjoyment of my home would be greatly diminished.

“The noise associated with manning a pizza oven will also be a disturbance as it will the increase the foot and car traffic.

“I am also worried the takeaway nature of a pizza oven will alter the ambience of what was a pretty Chilterns pub.”

Christina Tee, of Alma Green, said: “There is already a problem with parking outside of the pub’s car parking area.

“This used to occur only on bank holidays or a few summer days but currently there are cars on the main road almost every day.

“There have been two accidents directly relating to parked cars from the pub within about the last year so I would suggest that parking issues and the marked increase in capacity should be investigated.

“There is often difficulty for residents to exit Alma Green and Cherry Tree Close safely and there are regularly cars blocking the pavement for pedestrians.”

Caroline Timmis, a neighbour, said: “Customers Park in Alma Green when the pub car park is full, which is most of the time as there are very few spaces.

“This impacts on the ability of our visitors to park and impedes us manoeuvring out of our drives and our children are no longer safe playing outside due to the increase in cars in the close.

“The marquee is obviously not soundproof so there is increased noise from customers and the entertainment they put on at times.”

Moira Mackechnie, of Nottwood Lane, said: “The main road through Stoke Row is too narrow for parking down such a long stretch of the road.

“There have been several accidents outside the pub and it is very hazardous for residents of all four local lanes to emerge in safety by car.

“Visitors disregard requests to not park on the pavements which then become inaccessible to walkers, prams and disabled people, who are forced to walk in the middle of the road.

“I live directly next door to the pub, car park and allotment and my house and garden are regularly filled with cooking fumes, car parking noise and some late-night music.

“I do object to the likelihood of wood fumes from the pizza oven filling my home and garden with woodsmoke.”

Mr Redfern said: “I understand the neighbours’ concerns. I really do sympathise but if the marquee is not there then there is no pub.

“As we are a Grade II listed building, the Government will only allow us to have it up for 120 days a year, which is not even four months. The cost of taking it down and putting it back up again is unfeasible. It fits nine to 10 tables and they’ve remained there since we
re-opened after the first lockdown and we don’t feel that covid is over despite what the Government has said. I don’t trust a lot of them anyway as they’ve been having parties.

“We just don’t know what will happen. What is stopping another variant coming? I don’t think it’s the right time to assume covid has gone.

“I don’t think the marquee should be there forever. It’s a temporary structure but if I can keep it there while covid is still around and there is the possibility of a new variant then that would be good.”

Mr Redfern said parking had been a problem in the village for many years.

“Douglas Green, who I bought the lease from, said there’d always been cars parked on the main road,” he said.

“We have the Maharajah’s Well, the store and the school. There’s no public car park in Stoke Row and when we were shut our car park was full. We had to put beer barrels in the car park to stop people parking there as they shouldn’t have been travelling to the village during the lockdown but then the main road was full.

“Our staff park at the business opposite who let us use six bays to free up space in our car park so I’ve done everything I can. What do people want me to do — give up?

“I’m just trying to do the right thing and trying to survive in business. It’s very difficult and people seem to hate me and won’t come into the pub.

“I’m just trying to keep my business running and carry on employing people.”

The council is due to make a decision by February 15.