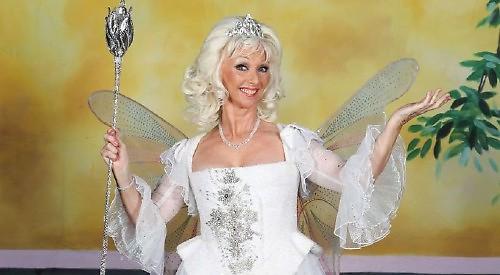 THE multi-talented Debbie McGee is about to add another string to her bow.

The dancer, radio presenter and actress is to play her first straight role on stage.

Debbie, who lives in Wargrave, has been cast as a psychic, Annie, in The House on Cold Hill, a new production which opens at the Mill at Sonning next month.

The show is adapted from Peter James’s modern-day supernatural thriller.

Debbie says: “There are moments that you kind of think, ‘Oh my god, what’s going to happen’ as it does twist and turn. It’s one of those, you know, it’s not predictable, which is what I love about it.

“This is the first straight acting I’ve done. I’ve done loads of pantos and things but that’s just overacting. This is a really different experience, which I love.

“It’s a different process because the rehearsal period is longer than anything I’ve ever done before.

Debbie, who spent 15 years on TV with her late husband in The Paul Daniels Magic Show, said she jumped at the chance to “go straight”.

“I’ve got a wonderful director, who had a picture of what I should be,” she says. “I think I look a bit wacky in what I’m going to be wearing but I’m playing it really a bit more like a medium.

“She’s in this house and she senses things. I’m absolutely loving it, I really am.”

The Mill is very familiar to Debbie, which she used to visit with Paul as customers.

She says: “It’s such a lovely experience to go and have lunch or dinner and then go in and watch the play. I’ve seen most things they’ve had on since I’ve lived here and Paul and I loved going.

“The fact I’ve got a chance to actually act in one of their plays, you know… wow. I can’t believe my lucky star has been shining on me.”

The production was originally scheduled for spring 2020 but was postponed when the coronavirus hit and theatres were closed for months on end.

Debbie, who has appeared on Celebrity MasterChef, Mastermind and, of course, so nearly won Strictly Come Dancing, found that her own schedule was hit particularly badly.

She says: “Although I do loads of television work, strangely enough, from that March, when we hit lockdown, I had a year-and-a-half of working that was all theatre.” She was booked to be on a tour of a musical, possibly going into the West End, then a Christmas pantomime, Cinderella, in Southampton, then going on tour again.

She was even supposed to host a Strictly cruise. “I wouldn’t even say it was shelved — it just kind of went,” says Debbie.

She spent three months in lockdown at the riverside home that she shared with Paul, her husband of 27 years, until his death from a brain tumour in March 2016.

It was during this time that she wrote her one-woman show, which would eventually make it to the Mill in June last year.

Debbie says: “I thought, ‘Actually, I need to have a purpose for something’.

“This area, it’s such a community, we were all looking out for each other. Different people were shopping for everybody and different things like that... it really kind of inspired me to think, ‘Hmm, what do I really want to do in my life?’”

At the end of 2020, Debbie was asked to step in at the last minute to replace Britt Ekland when she pulled out of the Theatre Royal Windsor’s pantomime, Cinderella.

She played the Fairy Godmother for just 30 days before Tier 3 restrictions shut down the show.

She was back into panto for the 2021 season, playing the same role in another production of Cinderella at the Mayflower Theatre in Southampton with Strictly judge Craig Revel Horwood as the Wicked Stepmother.

Debbie says: “You can plan everything and then it never goes quite to what you’re thinking, or you can want a job and then you don’t get it, but usually it’s for a reason and there’s something better round the corner.

“My whole life has been like that. I just believe that what’s meant to be is meant to be and I just think, well, whatever life throws at you, you just have to believe you can deal with it.”

She says that the pandemic helped to keep her loss of work in perspective.

“I just always felt so lucky because of all the people I know whose lives just changed dramatically and the stress it brought them.

“Even now they’re still going through it and trying to keep their businesses going.

“Although I lost all that work, I wasn’t going to starve and that’s all I kept thinking about — all these poor people worrying about how they were going to feed their
families.

“People tend to think that if they’re okay, they don’t need to think of others but actually some people do and that was in the forefront of my mind.”

• The House on Cold Hill is at the Mill at Sonning from Thursday, February 3 to Saturday, March 26. Call the box office on 0118 969 8000 or visit www.millatsonning.com