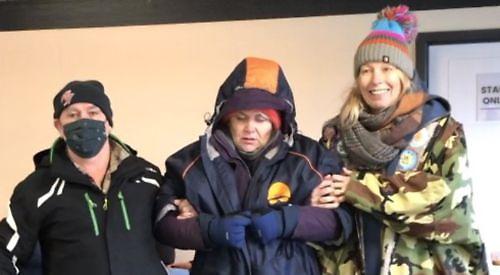 A WOMAN from Goring has become one of only 600 people to complete the “ice mile swim”.

Kate Hartwright, 51, had to swim one mile in water of less than five degrees Celsius while wearing only a swimming costume, goggles and a silicone swim hat.

It took her 41 minutes and 30 seconds to complete the endurance challenge, which has been ratified by the International Ice Swimming Association.

She said: “I’d aways wanted to give it a go as I’ve always been a swimmer and swam my first mile when I was nine. I wasn’t able to do it when I was a single mum but when I met Ben four years ago I was able to get back into it. I wanted to try open water rather than going back to the pool and I started going to local lakes and rivers and meeting people there. I didn’t take to it straight away as I struggled at first, especially with the breathing.

“Now I introduce other people to it and help them learn from my experience.”

She joined the Henley Open Water Swim Club and in 2020 swam the Channel in 19 hours and raised £6,500 for the MS Society.

In November, Ms Hartwright discovered that she was able to stay in cold water for a long time when she swam from the Flower Pot Inn at Aston to Medmenham.

She said: “I realised I could swim further than I thought in extremely low temperatures, head down front crawl. I had only been able to watch in awe other hardcore swimmers do this before.”

Her latest challenge took place at Hatfield Lake, near Doncaster, on January 22 when the water was 4.5C. She was one of nine people attempting the swim. Beforehand she had to have an electrocardiogram and a medical and a medical team was on hand on the day.

She was accompanied the whole way by a team in a support boat.

Ms Hartwright said: “It was truly the hardest thing I have ever done.

“I really enjoyed the first half — my head was in a good place and the sun was rising, which actually was a huge hindrance because I couldn’t see the course or the crew in the boat next to me.

“I struggled to swim the last 400m, which is known as ‘the death zone’.

“All the blood from your arms and legs goes to your core to keep your vital organs warm so it’s like swimming with heavy limbs.”

After finishing, she had to be helped out of the water.

“I had to be physically dragged out and into the drying room,” said Ms Hartwright.

“I was incoherent and unable to move and they had to dress me as quickly as possible.

“I struggled with my recovery — it took me more than an hour to be able to walk and talk properly again.

“There were nine swimmers taking part each with their own crew and boat next to them monitoring their stroke rate and body position. Sadly, three had to be pulled out.

“I did not realise it would be quite such an extreme threat to my health and my sanity.

“It’s an extreme test of mental and physical endurance.

“I’m an experienced cold water swimmer so people shouldn’t go into it half-heartedly as the consequences for beginners can be dangerous.

“But done properly it has great benefits for health and wellbeing.”

She said: “My Aunty Dale, 64, is housebound with MS and unable to enjoy the life she had imagined.

“I know if she had not been diagnosed with MS she would have come swimming with me in cold water at least once as she loved the outdoor life. I called her after the swim to tell her the tale.”