Residents call on drivers to stop speeding along street 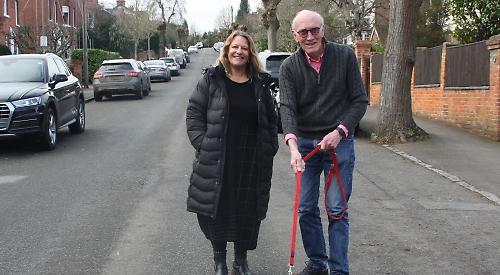 RESIDENTS have launched a campaign to stop speeding traffic on their street.

People living in St Mark’s Road. Henley, say it has become like a “race track” with drivers routinely ignoring the 30mph speed limit.

There have seen several near-misses involving children walking to and from Trinity Primary School in Vicarage Road.

A petition signed by 131 residents has been presented to Oxfordshire County Council, the highways authority, calling for action.

Organiser Tony Hoskins, who has lived on St Mark’s Road for six years, said that an unofficial survey showed that 94 per cent of the 112 households wanted speed-calming measures such as extra signage, speed bumps and warning lights.

Mr Hoskins, a managing consultant, said: “The petition urges the council to implement measures to reduce speeding, including advisory signage at the top and bottom of our road to inform people it is a residential area and should not be used for through-traffic.

“We think flashing lights at the junction of Vicarage Road warning drivers to cut their speed due to the school exit could be effective as well as speed limit signs to clearly indicate a 20mph zone and perhaps even speed cameras.

“We also think speed humps and narrowing the road at specific points would encourage careful driving.”

Keri Powell-Froehlich 50, who has lived in St Mark’s Road with her husband James, 47, since 2015, helped to organise the petition.

The couple have three children, twins Sebastian and Ferris, 10, and Georgia, six, and are concerned about their safety and that of other children walking to and from Trinity school.

Mrs Powell-Froehlich said: “We are really concerned about the safety of schoolchildren crossing the street. There have been a lot of near miss collisions near the Vicarage Road junction.

“During lockdown we realised how quiet the road had got and just how much safer it was. The children were able to play outside and ride their bikes.

“They just can’t do that now because the cars drive up and down so fast.

“We held a door-to-door petition at the beginning of January which told us a lot about other residents’ concerns. We heard stories about their pets being run over and killed by cars.

“One lady had just missed being hit by a car while leaning across to grab her handbag from the passenger seat after parking on the road.

“The speeding vehicle couldn’t break in time and hit her car door but it could have killed her.

“The road isn’t necessarily busy but the cars that do pass up and down drive dangerously. I would estimate the quickest I have seen a vehicle travelling was more than 50 miles per hour.

“It seems to be drivers of all ages who do it, which is why we need to have this addressed. Our road has become a racetrack.”

Tom Potter, 44, and his wife Kate Potter, 45, who have lived there for three years and have three children aged five, eight and 10.

“It was awful,” said Mr Potter. “The road here has been a problem and St Andrew’s Road next door is also bad.

“It has become a rat run and people see a long stretch up the hill and probably think they can nail it.

“There are a lot of families here with young children and it isn’t safe for those who are walking to school.

“I think speed limiters should be put in place, such as islands that cars would have to drive around, or maybe planters — something aesthetically pleasing.

“I don’t think speed bumps would be enough to prevent the speeding problem. It is a very long and straight stretch of road, which needs to be broken up so that speeding is less appealing.”

Former town councillor Jane Smewing, who has lived in St Mark’s Road for more than 40 years, said: “Drivers have been ignoring the speed limit for years. People zoom up and down.

“Years ago we wanted speed bumps but instead a little one was put right on Vicarage Road, which isn’t helpful to us because cars have to stop there anyway as it’s a the junction.

“We need something to stop them accelerating up the road.”

Councillor Stefan Gawrysiak, who represents Henley on the county council, said it was important that he had evidence from a traffic survey which was recently carried out at both ends of the road.