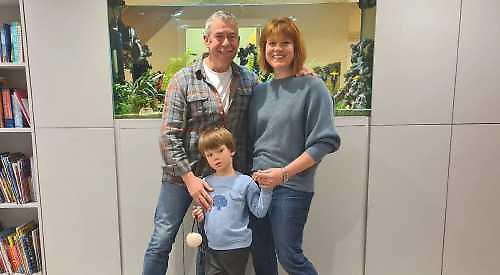 A VET will finally have her own practice after plans to convert an old pub were approved.

Sarah Moffat is to open a surgery at the former Reformation in Horsepond Road, Gallowstree Common, which closed in August 2020.

Brakspear, which owns the site, has been granted permission for change of use and to build two news houses on either side of the building.

Mrs Moffat, who has been a vet for almost 20 years, had been looking for a place of her own for six years.

She said. “It has been a long time coming and I just can’t wait to get up and running.

“I appreciate there was some sadness about the closure of a pub but it’s a really great location.

“I’m just so excited — we’re going to be a local, friendly, family-run practice.”

She grew up in Wargrave and attended the Piggott School in the village before going to Cambridge University.

“I’ve always loved animals,” she said. “I loved being outside with all the different animals and people said, ‘You must be a vet’ so I started to take it seriously.

“I investigated it at secondary school and did lots of work experience. I was good at science and maths, which is great but it’s also about having people skills.”

Mrs Moffat graduated in 2002 after six years of study.

She worked for Active Vet Care in Oakley Road, Caversham Heights, for five years and was clinical director when it became Oakley Veterinary Clinic.

She left in 2016 to start her own practice and has been freelancing event since.

Mrs Moffat said: “For the last six years I’ve wanted to have my own veterinary practice to serve the community positively in the way I want to do it.

“Caversham and Emmer Green have vets that are run by big companies but I like having a more personal feel to it.”

In 2018 she tried to buy MS Vets in Green Lane in her village but was outbid and it is now Sonning Common Vets.

“We’ve been trying to find a premises ever since,” said Mrs Moffat. “Then I saw the pub had been empty for some time and it was being advertised for someone to take it on. I contacted Brakspear as I thought it was a good location with good car parking and a building that would lend itself to being a vets.”

When the original planning application for houses was submitted some villagers were upset at the loss of the pub and its replacement by housing.

Kidmore End Parish Council tried several times to have the pub listed as an asset of community value but failed due to a lack of evidence about social events taking place there.

Brakspear changed its plans to two new houses, one with four bedrooms and the other with three, in September.

But some residents were still concerned as the site is in the Chilterns Area of Outstanding Natural Beauty and was not earmarked for development in the parish’s neighbourhood plan.

Adrian Duffield, head of planning at South Oxfordshire District Council, the planning authority, said: “The proposal would safeguard a non-designated heritage asset, would conserve and enhance this part of the village within the Chilterns AONB and would not harm the residential amenity of adjoining residents.

“The development would not result in conditions prejudicial to highway and pedestrian safety and would provide acceptable living conditions for future occupiers of the proposed dwellings and an appropriate market housing mix.”

Mrs Moffat said: “When it came to planning, people were sad about the closure of the pub but some people were very positive about having a new local vet.

“I appreciate that the community didn’t want more housing but once it’s done everyone will be supportive.”

She is buying the pub and the conversion will be carried out by Stoke Road Developments.

Mrs Moffat has designed her own surgery with two consultation rooms and a nurses’ office.

She said: “I wanted to keep the building looking as it is but to make it beautiful again. It looks very tired now and needs a facelift.”

She plans to have five members of staff, including her husband, who will look after client care as well as co-owning the business.

Mrs Moffat, who has two Labradors, four chickens and a retired horse, said: “In an ideal world it’ll be up and running as soon as possible but there’s a couple of things we need sort out.

“We knew that would be the case so we don’t have a timeframe but I want to get the ball rolling as soon as we can.”