Artist providing cheer as we emerge from pandemic 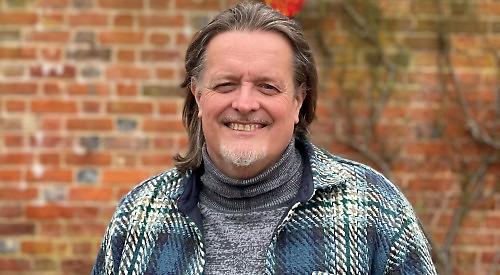 AN artist is literally giving people hope as we emerge from the coronavirus pandemic.

Allan Henderson’s latest work is a large illuminated sign spelling out “hope”, which he has installed on a garden wall at his home off Remenham Hill.

He says it represents a response to the covid-19 crisis and hopes it will cheer people up during late winter.

The sign, which is 8ft wide, is made of marine plywood painted red and covered with fairy lights.

Mr Henderson, whose partner Vanessa is a nurse consultant at the Royal Berkshire Hospital in Reading, said: “The sign is supposed to help uplift the spirits during these cold winter months. Hope is an incredibly human and optimistic word.

“We’ve all come a long way over the last two years and experienced so many different emotions, ones we never thought we would have to face.

“As someone who has not had a bereavement during that time, it could be all too easy for me to blank out what has happened.

“My wife works as a nurse and has had to deal with a lot of stress as a result of the pandemic. I think it is important that we don’t forget what has happened and I hope that we learn from the experience.

“As well as the bad, there have been many positives to come from the pandemic. We are all taking the time to slow down, think and get out and about more.

“It is also important that through all this we do not forget that hope is a great gift as we look to a brighter future after all the dark times.”

Mr Henderson, a father of two who has lived in Remenham for 25 years, has degrees in both design and fine art.

He worked in industrial for companies such as Psion, designing some of the first mobile phones and computers.

When he started a family he took the opportunity to become a contemporary fine artist and designer.

His elder son Ben, 29, is a data protection lawyer who grew up playing for Henley Rugby Club and now plays semi-professionally for the Rams in Sonning.

His young Jacob, 25, is a supply chain analyst at PepsiCo.

Mr Henderson is a regular participant in the annual Henley Arts Trail and his clients include politicians, media personalities and successful business people. He took two days to create his “hope” piece. He said: “I made it straight after Christmas and new year when once again plans were changed and family celebrations had been cancelled.

“I made it in part as a reaction to this disappointment, along with the uncertainty of what would happen during the cold, dark winter months.

“It was made to replace the large Christmas star that I had put up in the same spot.

“The star itself was a symbol of hope and signalled the optimism of the Christmas season and I felt that the ‘hope’ piece would continue this into the new year.

“It sat in my studio for a few weeks while I pondered if I should put it up. When my friend and fellow artist Richard Conway-Jones came over and saw the sign he said it needed to be seen.

“Hope encompasses every part of our lives and all the people in it. There has to be hope for the future and for the world despite all the turmoil that can sometimes feel overwhelming.”

Mr Henderson said he had received a positive reaction to the piece.

“When I walk around the town people stop me and tell me how much they love it,” he said. “As a professional artist, I try to make art that connects with people and when this happens it makes me very happy.” He has another light installation at the Spoon café in Duke Street, Henley, along with some of his small paintings.

Mr Henderson said: “I’ve been told my heart neon lightbulb has been a big hit with the staff and the customers and they don’t want me to take it down.”

His “hope” artwork was briefly discussed at a meeting of Remenham Parish Council after one member suggested it required planning permission.

Councillor Christopher Leeming said: “I have noticed a light-up sign on the garden wall of a beautiful Georgian terraced house in Remenham. I would have thought you need planning permission to have something such as that put up.”

He added that instead of “hope”, “perhaps despair would be more fitting”.

Councillor John Halsall said: “No, the property owner does not require planning permission and the piece is detachable and can be removed at any time. A lot of people like the sign.”

Councillor Darrel Poulos said: “I think it is great. I drive past it quite a lot and it does put a smile on my face.

“It is a lovely idea. It is a nice message and reminds me that I have a lot to be thankful for.”