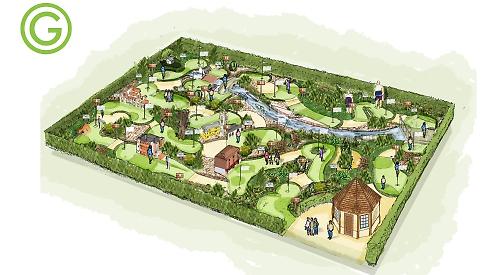 THE new adventure golf course in Henley is beginning to take shape.

The town council is spending about £256,000 transforming the old putting green at Mill Meadows.

The new 18-hole putting course will be themed around a tour of the town, with holes relating to significant buildings such as the Kenton Theatre.

Workmen have spent weeks creating the foundations and have installed miniature versions of the town hall and St Mary’s Church, which are still to be painted.

A mini River Thames has been dug but has not been filled with water yet. Town clerk Sheridan Jacklin-Edward said: “It is starting to take shape but doesn’t look anywhere near finished yet. We are on target to have the work completed by April.”

The adventure course was suggested by a working group which concluded this would provide another amenity for the community, enhance Mill Meadows and help attract visitors.

The old putting green fell out of use in 2018 after the satellite information centre, where the putters and balls were kept, was closed.

The designs were put together by Greenspan Projects, of Southampton.