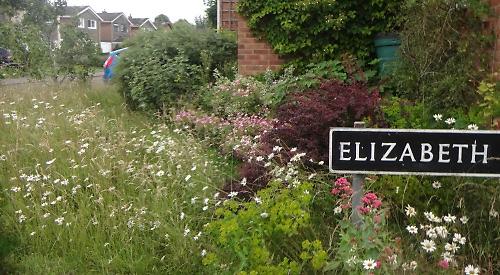 Rita Szûcs, of Marmion Road, entered the town council competition as gardening is her passion and she was awarded gold as well as the overall prize.

She helps maintain her neighbours’ gardens and encourages children in the road to get involved.

Ms Szûcs, who has lived in Henley for 14 years and works at Pizza Express in Market Place, said: “It was exciting when I found out that I had won — I couldn’t believe it.

“Out of all those other beautiful bee-friendly gardens, being the winner is a great honour. I feel absolutely overwhelmed and very proud.

“My mum in Hungary is especially proud of me as I learned everything about gardening from her. Gardening is my passion and hobby and I will definitely continue doing it.

“I would just like to say a big thank-you to all the lovely people who supported me — I feel amazing.”

Ms Szûcs was one of 29 entrants in the competition, which is run by the Henley in Bloom committee. They were all encouraged to plant flowers which are particularly attractive to bees, as they are in decline.

“Consequently, it was heaving with bees,” said the judges. “There was not an inch of space to be spied in this smallest of front and quite spectacular front garden. We believe that there is also a sedum roof over a sunroom, which heaves with bees in July.”

Ms Szûcs, who lives with her partner Tim Richardson, said “My front garden was all about the bees and a bit of a crazy meadow-
cottage style.

“I have a little greenhouse in my back garden and grow all sorts of vegetables and berries.

“I want to involve all our lovely neighbourhood kids in gardening. I planted some strawberries so when they were ripe they could pick them. It’s lovely to see the happiness on their little faces.”

Keith Thatcher, of Market Place, won a gold award for his front garden for the third time since 2017. The retired postal worker has lived at the same property since he was three but only discovered a love of horticulture following the death of his mother Marjorie in 2015.

He admitted he didn’t know the names of half his plants when he first won the top award in 2017, which he achieved again in 2019.

The judges said Mr Thatcher’s garden was a “sight to see”, adding: “Shrubs and flowers galore, all in pots and sitting in front of a wattle fence. Innumerable perennial flowers as well as two purchased mature hanging baskets.

“Not only does Keith keep his lovely display of pots but he also looks after groups of larger pots which stand in the entrance to the barn, which make a very welcome show for visitors and locals alike.”

Mr Thatcher said: “It’s great, especially as there are a lot of other good gardens. I’m very pleased.

“I donated my garden vouchers to Councillor David Eggleton to go towards a Henley in Bloom gardening project.

“Usually, I like going to the actual ceremony as you see other gardeners but I enjoyed the virtual one.

“I’m going to carry on gardening as usual. I like to move things around a bit where I repot plants but everything at the moment looks a bit dead.”

Susan Goodall, of Harpsden Road, was the third entrant to be awarded gold.

The judges said: “A neat and tidy lawned front garden, which in spring looked quite bare, became a magical palette of colour when it came into full bloom in midsummer with so many open flowers and a huge mix of plants and colours.

“Huge pink and red chrysanthemum bushes, antirrinums, agapanthus, dahlias, rudbekkia, allysum and much more. There was also a hanging planter and two baskets by the door to add yet more colour. Lots of bees could be seen — this garden must be a delight for passers-by in summer.”

Mrs Goodall said: “Several people kept saying I should enter, so I thought, ‘Why not?’.

“I’ve been gardening for a few years and I grow most of my plants myself. I remember seeing my dad gardening so I picked up a few things from him.

“My husband Roger grows vegetables in our allotment but I just like being outside in the garden and planning what I am going to plant and where.”

Mrs Goodall, who has lived in Henley all her life, said she planned to take part in the competition again this year.

Silver-gilt was awarded to Ann Eggleton, of Gainsborough Crescent, Josie and John Douglas, of Clarence Road, and Viv Greenwood, of West Street.

Silver went to Don Price and Babs Towner, who both live in Makins Road, and Marianna Gibbon, of Laud’s Close.

A special wildlife garden award was given to Mr and Mrs Hickman, of Elizabeth Road, for participating in No Mow May in June.

The awards were presented virtually due to coronavirus pandemic restrictions. A video was produced by the committee and delivered to participants to watch at home together with a hamper of goodies.

Councillor Eggleton, who is chairman of Henley in Bloom, said: “I want to urge people to keep doing what they’re doing and anybody else who wants to get involved to keep their eyes open for the next competition.”