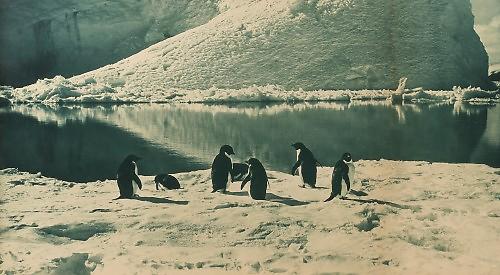 A BOOK shop in Henley has discovered three original photographs taken during the famous British Antarctic Expedition more than a century ago.

Jonkers Rare Books in Hart Street bought the pictures, which had belonged to an American
collector.

They were taken by Herbert Ponting during the Terra Nova Expedition led by Captain Robert Scott, which took place between 1910 and 1913.

He and four companions attained the South Pole on January 17, 1912, where they found that a Norwegian team led by Roald Amundsen had preceded them by 34 days. Scott’s party died on the return journey from the pole.

Many members of the large expedition team also died of hypothermia, including Mr Ponting.

Christiaan Jonkers, who owns the shop with his wife Sam, deals in material related to the polar
expedition.

He is now selling the photos at prices ranging from £9,500 to £25,000. Tom Ayling, the shop’s travel specialist, said: “We are very interested in the polar expedition and particularly Antarctica, especially the ‘golden age’ from Scott’s first expedition in 1901 to 1913 when he tragically died.

“We have lots and lots of customers interested in that period and we’re helping a number of people build the most extraordinary collections.

“Ponting photographs are always things we are looking out for as there’s a great demand for them.” The first photograph, called Summertime, The Opening-Up Of The Ice, measures 580mm by 740mm and features a group of penguins surrounded by ice. It is priced at £25,000.

The second image, called The Southern Party, is 405mm by 595mm and shows the group of people taking part in the expedition before they headed for the Great Ice Barrier to create depots of provisions for the polar party the following year. It is also priced at £25,000.

The photographs were developed in a specially constructed darkroom on Antarctica and were first exhibited at the Fine Art Society as large-scale carbon prints in 1913.

Mr Ayling added: “What is notable about these photos is the exceptional condition they are in.

“The carbon process enables one to print on a large scale but the resulting prints are inherently susceptible to chipping and fading over time.

“Examples as well preserved as these are very seldom encountered nowadays. They still have the integrity to them.”

Incidentally, when news of Capt Scott’s death reached England, there was mourning in Henley, where his mother lived and he had often visited.