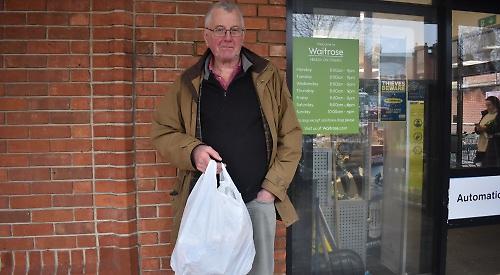 A MAN has been returning his non-recyclable plastic to the Waitrose store in Henley for two years to try to persuade the company to stop using it.

When Tom Fort goes to do his weekly shop he takes a large bag of plastic to encourage the supermarket chain to improve what he calls its “lamentable performance” on non-recyclable packaging.

The former BBC journalist, of Wood Lane, Sonning Common, has been shopping at the supermarket off Bell Street for about 20 years but believes Waitrose’s attitude towards packaging is “behind the times”.

He said: “They should be leading the way, not being dragged kicking and screaming into a more responsible attitude.

“Everybody knows non-recyclable packaging is bad but no one wants to do anything about it, so I started to return it to the store about two years ago.

“At the time a Waitrose spokesperson came out with the predictable guff about how much progress they’d made, how they were working day and night to tackle the issue, how they were striving to meet targets for reducing use of non-recyclable plastics etc. But since then there has been no perceptible improvement.”

Mr Fort, who is an author, mostly returns packaging from fruit, vegetables and coffee. He has been buying the same bag of maris piper potatoes for 10 years and the packaging hasn’t changed.

He said: “The thing that irritates me the most is that the bag says, ‘Not yet recyclable’, suggesting it will soon change but nothing does.

“Almost all the packaged salad and herbs come in non-recyclable packaging, as does the coffee and much of the bread — it’s just so unnecessary.

“Obviously things aren’t as bad as they were but we’re miles behind other countries in Europe. If I can do anything to make them stop and just think for a second then it has been all worthwhile.”

The former Sonning Common parish councillor would like to see a “day of anti-plastic action” in Henley where customers of Waitrose and other stores such as Sainsbury’s and Tesco return their non-recyclable plastics to customer service or the entrance of the stores.

Mr Fort said: “I’ve seen it done in other places. I do think that what we need to do is not be so nice about it.”

He also spoke out in support of Julia Carey, an environmental activist who has revived the make Henley “plastic-free” campaign.

To be accredited, Henley needs to meet criteria set by Surfers Against Sewage, a marine conservation charity and campaign group, which she hopes to do by the end of May.

Mr Fort said: “I wish Julia Carey all the best with her campaign against the plague of plastic in Henley. If there is anything I can contribute, I would be happy to do so.”

Karen Graley, packaging innovation manager for Waitrose, said: “Eighty-six per cent of our own-brand packaging is already classed as widely recyclable and we’re committed to making all of it widely recycled, reusable or home compostable by 2023.

“We encourage customers to bring in items labelled ‘recycle at larger stores’. This includes bread bags and food wrap.”