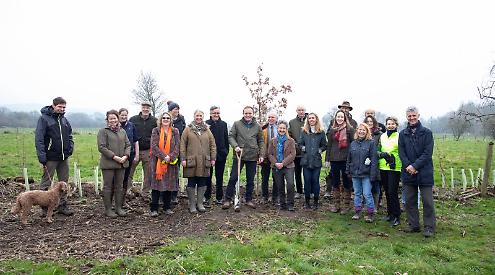 THE Environment Secretary planted an oak tree in Watlington as part of a project to rejuvenate hedgerows.

George Eustice visited West Meadow on Thursday last week to talk to volunteers working on the project, which is led by CPRE, formerly the Campaign to Protect Rural England, and Wild Oxfordshire.

Since the launch of the project in June, 700m of new hedgerow have been planted and 320m of gaps have been filled in. In addition, 18 people have been trained in hedge-laying.

Mr Eustice said: “It’s good to see this project and meet you all today. The fact you are taking part and showing commitment to the countryside and community is fantastic.

“We can all learn from what you have been doing here. Projects like this bring together local authorities, charities and the community.

“We want to reverse the decline in biodiversity and we want to get things moving.

“I grew up on a farm in Cornwall and I know hedgerows are the most important farming block. We have lost too many of them  — if we want to stop the biodiversity decline and see nature recover, we know how important it is to preserve them.

“It’s not just about replanting them but managing them as well, so they become a real Mecca for some of our species.

“It’s great to see so much enthusiasm and commitment from the community. People have given their time and I contributed in a very small part, planting an oak tree in the hedge.”

The minister’s visit concluded at the Spire and Spoke pub in Hill Road, where he met more residents and there was a screening of a documentary about the Watlington chalk stream.  Roselle Chapman, of Wild Oxfordshire, said: “It shows great vision from the Secretary of State, acknowledging that there’s so much more to protecting nature than just planting trees.

“The community aspect in particular is very important in Watlington. We started with land owned by the Watlington Support Fund and then adjacent landowners decided to join too. Everyone can do this and you don’t need to be an expert to be able to contribute.”

Crispin Truman, chief executive of CPRE, said: “It’s wonderful to see this project thrive and how many people have joined in to achieve these results. It brings people together and that’s such a big part of the solution.

“One of the benefits is that we will take it as an example and use it for other projects and other communities nationally. It is almost impossible to define the enormous value of our hedgerow network.

“Just as our arteries and veins supply our bodies with nutrients and oxygen, the UK’s hedgerow network defines many of our rural landscapes and it must remain healthy to benefit villages, towns and cities.

“Our research shows that investing in our hedgerows is a win-win for climate and people in both the countryside and urban areas.

“Sadly, half of our precious hedgerows have been ripped from the landscape since the Second World War and we’ve seen a huge decline in nature and soaring carbon emissions. If we invest in the countryside, we can turn around the situation we are in.”

Anna Badcock, who represents Watlington on South Oxfordshire District Council, said: “I’m incredibly proud that Watlington is setting an example for other communities.

“What was so successful in this case is everyone worked together on this project and I think it says a lot about the wonderful people in our town and the sense of community that is so strong in Watlington.”

CPRE says that while the Government has set clear targets to increase tree planting, it is yet to set a target for hedgerows, which are important in absorbing carbon, protecting against flooding and aiding nature’s recovery.

It has called on the Government to set a target to increase the hedgerow network by 40 per cent by 2050.