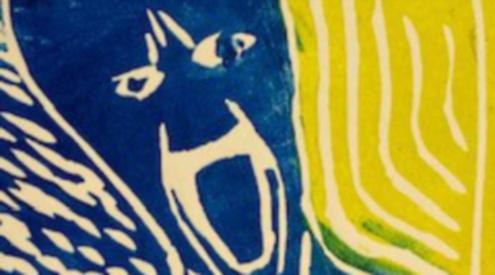 A TOTAL of £375 was raised by artists in Watlington in aid of the Ukraine Embassy Global Support Fund.

The town’s arts hub,which is based at the Methodist Church, produced 20 prints in blue and yellow which were on sale at the Granary Café in High Street.

The prints came from an idea by artist Jules Bishop, one of the funders of the hub.

Jaine McCormack, who organises the town’s Artweeks festival, said: “The prints sold out and it was so nice to see such a positive response from the people of Watlington.”

The artists have also decorated the telephone box in Christmas Common with blue and yellow fabric and some of the prints to show their support.

Ms McCormack said: “During lockdown we decided to restore the phone box so that it would look smart.

“Now we want to show that as a community we care about what is happening in Ukraine.”

Meanwhile, Mark Lord, a photographer and print-maker who lives in Watlington, has created a blue and yellow, Matisse-inspired print of three lemons in a Cornishware bowl and raised £600 for Unicef.

He said: “What is happening is so terrible and the stuff we’ve seen in the news pushed me to do something.”