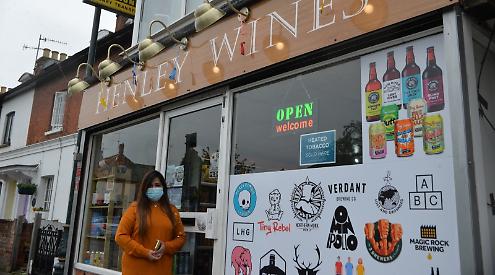 A SHOPKEEPER in Henley has told how she feared for her life when a gang of five teenagers stole £190 worth of alcohol from her store.

Aman Kaur, who owns Henley Wines in Reading Road, was threatened by one of the youths who targeted the shop on Monday evening last week. Her husband Banti Uppal was out buying groceries.

She said the same group had been caught stealing from the shop during the town’s Christmas festival in November.

Mrs Kaur was at the back of the shop restocking shelves when the gang of three young males and two girls came in at about 6.30pm.

She said she recognised them immediately and told them to leave as they had been caught stealing before. However, the gang wouldn’t go and one youth told her he would hit her with a bottle if she “came at him”.

Ms Kaur, who lives above the store with her husband and children, Jiger, 10, and Samar, seven, said: “I recognised the two girls and the boys as well. I told them straight away to leave.

“The guy said, ‘We’re not going to leave’ and after that they just started taking the drinks. I did shout at them to leave or I would call the police but one of them just took a large bottle of tequila. I kept shouting but they weren’t listening.

“I decided to start filming them but they still kept taking the drinks from the shelves.”

In the video footage, the youngsters can be seen taking bottles from the shelves and a fridge and hiding them in their jackets. Ms Kaur, who opened the store in June last year, can be heard telling them to put the bottles back and threatens to throw a plant on the counter at them.

One youth rushes out of the store with a bottle under his coat and pushes the plant off the counter before running off with a second youth following close behind carrying a six-pack of beer.

The third youth refuses to put a bottle of vodka back and “dares” Ms Kaur to throw the plant at him before leaving with the bottle.

Two girls standing by the fridge take cans and hide them under their jackets before leaving.

Ms Kaur throws another plant out of the door and one girl picks it up and throws it back at her.

She said: “If I had tried to get closer they were going to hit me. I was so scared and nervous as my little ones were upstairs. I was shaking afterwards.

“I had informed the police about this particular group before but I didn’t get a good response from them.” One of the bottles stolen was worth £65 while another was worth £45.

A witness who came into the shop immediately afterwards said he found Ms Kaur in the shop very upset.

The man, who asked to remain anonymous, said: “I was parked outside and I saw a kerfuffle in the shop, which seemed to be full of people.

“They left and walked towards the station. I went inside to check if the lady was all right and she was
crying.

“She told me she had been robbed and showed me the video — it was incredible how blatant they had been.

“I went round to the station and there was a group of young adults sitting there.

“I called the police and told them what had happened and that a train was coming so they needed to get there quickly.

“I asked the train driver to stop as the police were on their way and he held the train for a bit but the police never showed up.”

Ms Kaur added: “The thing is I called the police straight away but no one responded and [the witness] had stopped the train. It’s not a good sign as we had told them exactly where the group was but no action was taken.”

The man, who returned to check on Ms Kaur, said: “This is not something that should be happening in Henley but you don’t really want to see it happening anywhere. It’s like the whole of society is falling apart.”

Police visited the shop the next day and took the video footage from Ms Kaur.

She said: “The police did nothing the first time round but I chased them this time and requested an officer came and saw me face to face.

“They said the group were from Reading and they’d been caught doing the same thing in other areas.

“I told the police they needed to do something as they will come back and do it again.”

A spokesman for Thames Valley Police confirmed they were investigating.

He said the force took all reports of shoplifting seriously, adding: “We will always respond to incidents that affect our communities the most, particularly where threat, harm and risk is at its greatest.”

Police appealed for anyone with information to call them on 101, quoting reference number 43220101456.