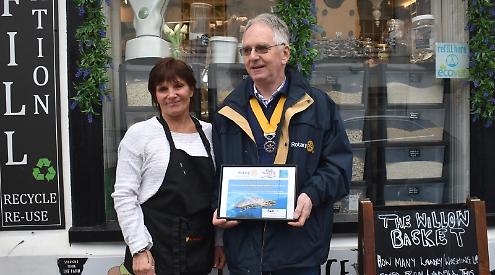 TWO Henley businesses have been recognised for reducing plastic waste.

The Willow Basket in Friday Street sells non-packaged food so customers bring their own jars and containers to fill with pasta, seeds, herbs, spices, rice and cereals.

Drifters in Duke Street has stopped using disposable coffee cups and instead gives customers mugs to take away and keep and bring back next time or donate to charity shops.

End Plastic Soup is a global campaign by Rotary to ensure there is no plastic in oceans, seas, lakes and rivers by 2050.

The Henley club’s president-elect Craig Wilson and environmental representative Jeremy Gaunt visited the businesses to present them with a framed certificate and a window sticker.

Jane Tutill, who opened the Willow basket five years ago, said: “What an absolute privilege.

“I’m chuffed to bits and it’s going to raise awareness for everyone in Henley that we can all do our bit.

“Everyone thinks they aren’t doing enough but if you just do a little bit then collectively we can reduce our single-use plastic.

“Where does all our waste go? I look at the ducks and think that in their lives they’re not creating any waste but we live alongside them and produce so much.

“Mums and dads bring children into the shop and they see it doesn’t have to be like it is in the supermarket with everything thrown in and not really thought about. We can all cut down on our single-use plastic.”

Millie Jeans said: “We both feel over the moon to be recognised. Drifters hasn’t used a takeaway cup for 12 months, which has stopped about 10,000 single-use cups from going into landfill.

“It was a decision not taken lightly but someone has to put the planet over profit. Our view will touch a nerve with some but we believe if you haven’t got a reusable cup in 2022 then you are as much the problem as those companies producing them. It’s all about supply and demand. Stop the demand and there will be no option but to cut down supply.

“We aren’t stupid and know it goes much further than a cup but if you can change just one thing you do to make a difference then happy days.”

Mr Wilson said: “I hope this will show people that Rotary is trying to save us from using too much plastic. There is a lot of organisations in the town that are trying to work together now to improve the situation.

“This award is just small recognition that people can see when they go into the shops and creates a starting point for conversations to spread the word.”

Mr Gaunt said: “We are supporting this global campaign by giving awards to local businesses which have done something specific to cut back on their plastic waste.

“The Willow Basket has a long history of avoiding waste with reusable containers and Drifters has been very brave in getting rid of disposable coffee cups. We will be giving out more awards and would like nominations of people who would fit the criteria or companies to come forward to say what they have done to reduce plastic.”