Residents ask for streets to have 20mph speed limit 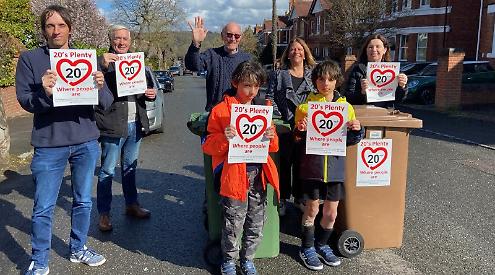 THE speed limit in two streets in Henley could be reduced to 20mph.

Residents of St Mark’s Road and St Andrew’s Road have submitted a formal application to Oxfordshire County Council, the highways authority, to have the limit changed from 30mph.

It is thought to be Henley’s first such application, although the limit on town centre streets was reduced to 20mph in 2019.

Speed surveys carried out earlier this year showed the average speed on the streets was no higher than 25mph.

The residents have also applied to Thames Valley Police for a community Speedwatch scheme.

This follows several near-misses involving children walking to and from Trinity Primary School in Vicarage Road.

Residents are also concerned about the risk of their pets being killed on the road as well as more near-misses involving vehicles crossing the junction of St Mark’s Road and Vicarage Road.

A petition signed by 131 residents has been presented to the county council calling for action. More than 150 “20’s plenty” wheelie bin stickers have been placed along the street urging passing drivers to slow down.

Mr Hoskins, who has lived in the road for six years, said: “I’m really pleased we’ve moved forward from the petition to a formal application.

“We’re feeling very positive about the outcome but we also recognise there is probably a long way to go.

“Equally, once we’ve got the lower speed limit it doesn’t necessarily mean people will adhere to it, which is why we’re pushing for the community Speedwatch scheme as well.”

Residents of St Andrew’s Road were inspired by the campaign and submitted their own application.

Mr Hoskins, a managing consultant, said: “Both roads are shortcuts and people use them to try to avoid the traffic lights and 20mph speed limit in Henley.

“I’m pleased there are two applications as the road which didn’t have a lower limit would become a rat run.”

John Norrington, of St Andrew’s Road, organised the application to the council for his street. He said the volume and average speed of traffic had increased in the 12 years he had lived in the street.

Mr Norrington said: “I’m retired but I teach high-performance driving so I understand speed and the dangers and I’m very risk-averse as I see it happening.

“I had long been thinking that our traffic situation was getting worse — St Andrew’s Road is worse than St Mark’s — but we couldn’t have a 20mph for one without the other, so I thought this was a great initiative.

“We need it as the quantity of traffic and the speed of it has changed beyond belief since I’ve lived here.

“People don’t want to sit in big queues by the traffic lights so they use the residential areas which should have speed limits.

“It’s about time something was done before people are hurt.

“I’ve seen a little knock or bump here and people getting angry as they can’t pass. It’s really getting out of hand and it can’t get better with the new building taking place.”

The speed surveys were carried out by the county council between January 24 and February 1.

Councillor Stefan Gawrysiak, who represents Henley on the county council, said: “There’s always the actuality and the perception. If the average speed is 25mph it will still mean that there are people driving faster than that and St Andrew’s Road is particularly bad.

“The rule at the county council is that if we’ve got speeds of less than 24mph it means people will be compliant with a 20mph zone.

“I’m pleased the residents are campaigning and glad that I was ahead of the game in getting the speed surveys done.

“People travelling from Reading will turn left up these roads instead of travelling through the centre of Henley as it’s a shortcut to Oxford.

“A satnav gives people that route when there’s traffic so we can see why St Andrew’s Road wants something to be done.

“Drivers should realise when they’re travelling through Henley that people live in these streets and they have to travel consciously, carefully and responsibly.”

Cllr Gawrysiak said he hoped to hold meetings with residents before taking the applications through a formal public consultation.