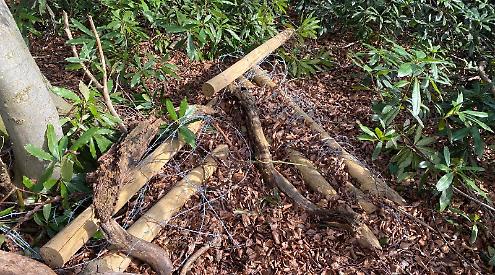 FENCING and signs at Henley Park have been vandalised.

About 15m of fencing was cut down and removed from the northern edge of the park near Lower Assendon.

The fencing had been erected by the Culden Faw Estate, which owns the land, to prevent unauthorised access.

The wooden poles, connected with barbed wire, were cut down, rolled up and left on the ground.

The nearby signs were defaced with a black marker and a nearby gate had barbed wire pulled off it.

The culprits had blacked out the words “private” and “no”.

Alex Dick, estate manager for the Culden Faw Estate, said that removing the fencing had caused a danger to people and wildlife. He said: “We put fencing and associated signage up for a reason. It is not only to prevent unauthorised access on to the land in question but also to deter people from walking on to areas where we routinely fell trees and shoot deer.

“The irresponsible and dangerous actions by whoever did this shows they have no regard for others or the potential consequences of their actions.

“I want people to understand if people get injured it’s not our fault. We’re not sure when it happened specifically as it’s a remote area but rather than using the footpath, someone has decided they are taking a shortcut through our woods.”

Mr Dick has reported the incident to the police and is now closely monitoring the area.

He said: “People think there’s a right to roam in this country but there isn’t. You wouldn’t walk through someone’s garden so why walk through ours?

“There’s 28km of footpaths in the area that are well maintained as we look after them. If people go off and cause damage then it’s an offence of criminal damage.

“The message is when and if we find them we will provide the police with photographic evidence and we will prosecute.”