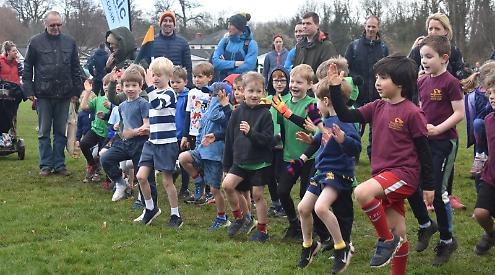 MORE than 200 children took part in a fun run as part of this year’s Henley Youth Festival.

The youngsters were all representing local schools in the event, which was held in Borlase Field, next to Henley Rugby Club in Marlow Road, on Saturday.

There were races for children from reception class to year 6, varying in distance from 0.5km to 1.6km depending on age.

For each race, the children lined up before chasing pacesetters along the course, which included a muddy hill.

The reception year race was won by five-year-old Abigail Hillyard, from Trinity Primary School in Henley.

She said: “Running always feels really good and I really enjoyed the run.” Her mother Emily said: “She runs so fast and we are really proud of her.”

Grace Hollins, six, from the Oratory Prep School in Goring Heath, won the girls’ year 1 and 2 race, which was 1km long.

Her father Chris said: “We are very proud. She started running one month ago and she has already run four races but this was definitely the toughest. She seems to have a real talent for it and really loves it.”

Max Mortimer, seven, from Trinity school, won the boys’ year 1 and 2 race. His mother Christine said: “I’m so proud of him. He does cross-country running at school and he is really proud to be part of it.”

The years 3 and 4 girls’ race was won by Jemima Watson, eight, who attends Rupert House School in Henley.

Her mother Alison said: “She has been taking part in the fun run since year 1 and she absolutely loves it.

“Running makes her feel really good and it’s a nice way to be part of the Rupert House community.”

He said: “I’ve been running for about two years and I enjoy how fast I can go.” His mother Colleen said: “We have quite a strong running programme at the school and had about 15 runners taking part, which is fantastic. Everyone is really proud of Ambrose.”

Luca Currie, 10, from Valley Road Primary School in Henley, won the year 5 and 6 boys’ race, which was the longest.

“I feel really happy,” he said. “It was really muddy but it was fun. This is the last year I could do it so it feels good to be finishing on a high.”

Henley Deputy Mayor Michelle Thomas presented all the participants with a medal and each winner also received a trophy.

She said: “It was lovely to see them all enjoying the fun run once again. My children used to do it and it’s always a really good day. Children missed out on so much because of covid so it was so nice seeing them coming together and fully embracing the day despite a bit of rain. I really enjoyed it and I hope I’ll be able to give out the prizes next year too.”

Organiser Clint Botha said: “It was great to have the fun run back. We had more than 200 children take part in the various races and everyone had a great time.

“There was a rain shower in the middle of the morning but this did little to dampen the spirits of the participants who were determined to finish their races and earn their finisher’s medal.

“I’d like to thank all the volunteers and mums and dads who made Saturday such a success.”