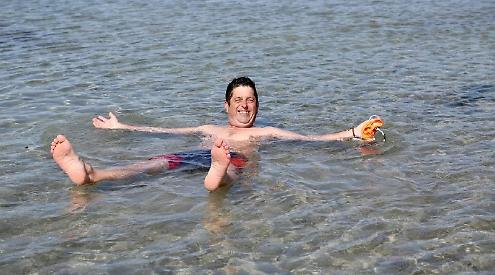 A MAN will attempt to swim the Bristol Channel four times this summer for charity.

Phil Warren, 51, of Whitehouse Road, Woodcote, will take on four separate routes between June and September, increasing the distance each time.

He will be raising money for the mental health charity Mind, having experienced a breakdown seven years ago and suffered with depression on and off ever since.

Mr Warren, a self-employed electrician, is a member of the Henley River Rats, four men who attempted to swim the Bristol Channel last year but had to abandon the challenge when one of them suffered severe seasickness and dehydration.

They were five hours and 16km into their 45km journey from Ilfracombe in Devon to Swansea in South Wales when they decided to stop.

This time, Mr Warren will be on his own as he attempts the four swims as follows:

June 8 — From Penarth to Weston-Super-Mare.

July 7 — From Penarth to
Clevedon.

August 20 — From Glenthorne to Porthcawl.

September 17 — From Ilfracombe to the Gower, near Swansea.

The swims will range in length from eight nautical miles to 24 but will actually total about 100 miles due to the varying tide.

If he completes the challenge, Mr Warren will set a world record.

He said: “After last year I felt I wasn’t done with it, so I asked the lads but they weren’t able to make it so now I have taken it upon myself to attempt all four routes on my own. I’m nervous about the distances, not because I can’t do them but because the Bristol Channel has the second highest tidal range in the world and can drop 52ft.

“The tides are always changing and the first distance can increase from eight nautical miles to 12 or 16 and the longest stretch of 24 miles could become 45.

“Also the water can be very cold. If the temperature is 12C and you need to swim for six to eight hours, it’s touch and go. I hope it will be around 14C to 16C.”

Mr Warren, who is a member of the Henley Open Water Swimming Club, has completed the Thames Marathon twice and holds the event record for the breaststroke.

He represented Great Britain at the World Ice Championships in 2019 and took part in a club trip to the Arctic five years ago.

“I have been open water swimming now for seven years,” he said. “I now train in a pool. I am also doing a lot of gym work too to build strength, endurance and stamina.” Mr Warren suffered a major mental breakdown after separating from his wife seven years ago and sought help from his GP.

He swims regularly to help manage his depression and relax while surrounded by nature.

Mr Warren said: “As someone who suffers with depression, I wanted to recognise Mind and raise money for all its efforts to help people struggling with their mental health.

“I have learnt to manage my depression through open water swimming and have noticed my mental health has improved tenfold.

“My first breakdown came overnight really and I now understand how quickly it can hit you.

“The effects are huge and it makes you struggle with day-to-day tasks. I was ill for two to three months but I totally understand how people can be ill for months on end and it can take years to recover.

“I now manage it through drugs and sport.”

Mr Warren trained as a mental health first aider in order to help other people experiencing depression and anxiety. He said: “It was interesting because a lot of it rang true with me and what I went through.

“I learned to identify what to look for in people who might be suffering with their mental health and how to go about addressing it.

“Don’t be afraid to talk about it as that is the main factor in getting help. Don’t be scared because it is quite normal.”

“Being at one with nature totally clears my mind and it’s almost a reset,” he said. “If I haven’t been swimming by the end of the week, I’m desperate to go.

“I love the Thames and the stretch from Henley to Marlow.

“I have also swum on the eastern coast of the USA, where I swam with manatees, sharks and dolphins.

“I am lucky to have done these things and hopefully there will be more in the future.”

Mr Warren said: “Research has highlighted the benefits to individuals’ mental health along with that of physical wellness.

“There are many benefits to open water swimming. Just swimming with a bunch of people who have the same interests as you is great.

“If you are interested, get involved with the local clubs. Henley Open Water Swimming Club and Caversham Swim have courses for newbies and you always swim with people who are experienced.”