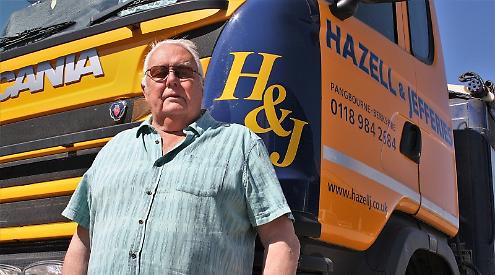 A WASTE and recycling company has been forced to abandon its charitable fundraising drive following complaints.

Hazell & Jefferies, which is based at Whitchurch Hill, has been donating £5 from each skip it hires out to Cancer Research UK.

The company has placed 11 specially painted pink skips on roadside verges around South Oxfordshire, including Nuffield, Ewelme and Rotherfield Greys, to help promote its initiative taking place during March.

But it has been criticised by Freddie van Mierlo, who represents Watlington on Oxfordshire County Council.

He wrote to Hazell & Jefferies to complain, saying the skips “predominantly” advertised the company’s services and had encouraged fly-tipping.

Councillor van Mierlo said: “I have been disappointed to see skips spring up by the sides of the road across the Chalgrove and Watlington area, purporting to be for charity.

“These skips appear to predominantly advertise your services and now have the added (yet predictable) misfortune of attracting bulky waste. I would like to request that you immediately collect these skips and donate an appropriate sum directly to the charity they claim to support.”

But Chris Stanley, general manager of Hazell & Jefferies, said he couldn’t understand why there was opposition to a temporary fund-
raiser which had already made £3,700.

“We just can’t get our heads around it,” he said. “I can’t think of anyone of an adult age who has not been affected by cancer, either directly or indirectly.

“But even if you don’t like having a skip at the end of your road, I am so surprised someone would want to complain about it when it’s there to raise money.

“It was very disappointing to receive a very curt email from the county councillor using words like the charity we ‘purport’ to be giving the money to. The word ‘purport’ is pretty insulting.

“He said it was advertising but people need to know our number in order to donate and organise the skip.

“We have had incidents of people stopping and putting their rubbish in them for free but we are clearing them out.

“We are being made to feel that we have done something evil but it was to be a nice story as far as we could see.”

Mr Stanley said he had asked Cllr van Mierlo to clarify his comments.

Cllr van Mierlo replied: “To be clear, I am not doubting the intent, which is of course laudable and welcomed.

“However, I have driven past a number of these myself and it has not been evident they are for charity nor how.

“This has been the experience of residents as well as they report to me their concerns. What has been clear, in the few seconds you get driving past, has been the Hazell & Jefferies branding.

“However, my real concern is that they are now attracting fly-tipping, both in the skips and next to them. I do believe there would be more effective ways to support charities rather than placing these on the highway, attracting waste in this way.”

The company is now ending the initiative early. Mr Stanley said: “Due to the amount of grief we are now getting we have decided to collect the skips.”

Company owner Richard Hazell and his staff came up with the idea and hoped to raise £5,000.

Mr Stanley said: “We decided to raise money for Cancer Research because there are people that Richard and I both know who have had cancer and it is a cracking charity. There are people who are alive today due to its work.

“We painted the skips at our own cost and we made sure we spoke to all the local farmers who neighbour the verges where we put the skips to make sure they were happy with them being there.

“We were very careful when placing them so not to obscure any sightlines along the roads. People have called us to say that they were happy with the idea and we have had lots of likes on Facebook.”

Mr Stanley said Mr Hazell had agreed to make up any shortfall between the amount raised and the target amount.