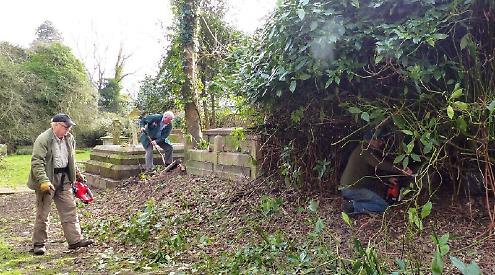 VICTORIAN gravestones have been uncovered in Whitchurch.

The graves at St Mary’s Church are of two philanthropists who gave money to the village — George Jackson, who died in 1842, and Robert Pigou, who died in 1852.

They had been covered by ivy and brambles for decades until a group of volunteers cleared this.

Members of the Friends of St Mary’s and St John’s Church Whitchurch also removed ivy from the old mortuary building at St John’s in Whitchurch Hill which had been growing for decades. Sally Woolhouse, secretary of the Friends, said: “We try to do three or four working parties a year when we can muster enough people to help.

“It tends to be older people because people with children have more pressures on their time.

“We have the added complication that we have two churches in the parish so there’s double the amount of work than most parishes.

“The grass is mown but very little maintenance is done and the churchyards had become completely overgrown over decades.

“The mortuary building at St John’s, which is very old, was completely covered with ivy.

“At St Mary’s we uncovered some very impressive big Victorian memorials which had been covered up for decades. I’d never seen them before.

“Now that we’ve revealed them they need repairing because they have been damaged by the ivy and by trees being allowed to grow near them. So that’s the next problem for the church to deal with. You could say the families are responsible but where are they 200 years on?

“I recognised both of the surnames when we uncovered them and that’s because they’re on a list at the church of people who donated great sums of money to causes in the village through the church.

“It has created a lot of interest in the village and the Whitchurch History Society may dig in to their records to find out more.”