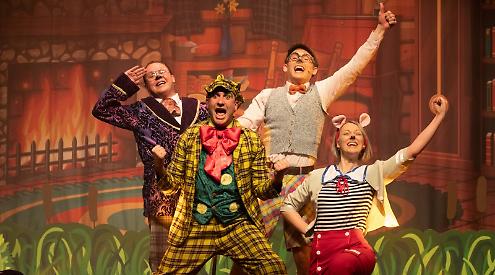 SPRING might seem a little early in the year for a panto fix.

Oh no, it isn’t, say the creatives at Immersion Theatre, who are bringing a production of The Wind in the Willows to the Kenton Theatre in Henley later this month.

They have taken Kenneth Grahame’s classic tale and tweaked it to give it a more playful, fast-paced edge with some slapstick skits.

James Tobias Clifford, of Immersion Theatre, says: “A lot of people think The Wind in the Willows is quite slow-paced and about the seasons changing.

“Yes, it is a beautiful story but our version is a really high-energy version. It has been going down so well with audiences because it’s really pantomime with lots of audience participation.

“People are really surprised when they come and see the show — they aren’t expecting it to be that funny, or that energetic. Even my mother, who is brutally honest, was like, ‘I loved that, I would see it again’.”

The novel, which was first published in 1908, follows the riverside adventures of Mole, Ratty (actually a water vole), Badger and their friend Toad.

Toad suffers from delusions of grandeur living in his mansion and is obsessed with fads, especially motorcars.

As Mole, Ratty and Badger try to keep him in check, Toad’s misadventures lead to them doing battle with some troublesome weasels, ferrets and stoats.

Grahame lived in Blewbury, near Didcot, and there are several local properties said to have inspired the idea for Toad Hall, including Mapledurham House, Hardwick House, near Whitchurch, and Henley’s own Fawley Court, sitting on the banks of the River Thames. James, who wrote the show as well as directing it, says: “I’m really excited to be bringing The Wind in the Willows to Henley because I think it’s the perfect location.

“The Kenton has the right atmosphere — it’s a gorgeous theatre and the show is going to sit really well within it.”

The cast numbers five. Toad is played by Ashley Cavender, Ratty by James’s fiancée Rochelle Parry, Mole by Luke Haywood and Badger by Tommy Carmichael while James himself will be Weasel.

James and Rochelle, who
co-founded Immersion Theatre, have sentimental reasons to be excited about returning to the Kenton.

They both starred in the pantomimes there from 2012 to 2014 and then in 2015, when they appeared in Peter Pan, with James as Captain Hook and Rochelle as Tinkerbell, they got engaged with James proposing on stage.

The couple have also been responsible for two Kenton pantos, Robin Hood in 2017 and Dick Whittington in 2018. The Immersion team managed to keep busy during the coronavirus pandemic, using open-air venues.

In 2020 they created a pop-up pantomime, Dick Whittington, in Shropshire which worked so well that they created more outdoor events when restrictions would allow in 2021, including The Wind in the Willows.

They will be staging the Kenton Summer Roadshow Rapunzel alfresco at Mill Meadows in Henley on August 27.

Immersion Theatre will also be staging this year’s Kenton pantomime, Aladdin, in December.

• Immersion Theatre presents The Wind in the Willows at the Kenton Theatre, Henley, next Saturday, April 9 at 1.30pm and 5pm. Tickets cost £13.50 adults, £11.50 concessions. The show has a running time of 100 minutes, including a 20-minute interval. For more information and to book tickets, call the box office on (01491) 525050 or visit www.kentontheatre.co.uk