Boy’s campaign for basketball could succeed 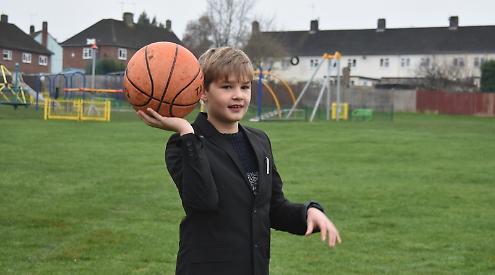 A BASKETBALL court could be built in Henley after a campaign started by an 11-year-old boy.

George Allen, who lives off King James Way, is raising money for the new facility at Makins recreation ground, off Greys Road.

He had the idea after he joined the Reading Rockets team and realised that people in Henley wanting to play basketball had to travel at least half an hour to be able to do so.

He approached the town council in November asking it to consider funding a court with two nets as well as floodlights.

The council said that a full court would not be feasible due to the size, cost and loss of open space. Instead it suggested having a basketball hoop integrated into a multi-use games area goal and a tarmac pad with basketball markings, which will cost up to £16,200.

Several locations are being considered including the recreation ground, Freemans Meadows, Mill Meadows and Highlands Park. Members of the council’s recreation and amenities committee have recommended that £11,200 is earmarked for the court, subject to a public consultation.

The rest of the money would come from other
fundraising activities.

George, who attends Gillotts School in Henley, told a committee meeting that he started to play basketball when he was seven and he believed more people would play if there was a court in Henley.

He said: “I started playing and I loved it. I am trying to get a court at Makins because the closest one is in Reading and I thought, ‘How about I try to get one in Henley?’ I believe basketball is great for your mental health too and helps to get you off screens.”

Councillor Laurence Plant said: “I’m a big supporter of this. It’s a great use of council money.”

Councillor John Hooper said: “Anything that can encourage sport in Henley I’m all for. We don’t want to make it a one-minute wonder, this is something for you, your children and your grandchildren so hopefully we can say ‘yes’ to it.”

Councillor Tom Buckley said: “People always complain that there is not enough for the kids to do in Henley so I think we should support this.”

The idea will now be considered by the council’s finance committee.

Speaking after the meeting, George said: “It was quite nerve-wracking to speak in front of so many people but I’m glad I did it.

“It was a really good opportunity to explain why I love basketball and why we need a court in Henley.

“A full court was what I have been imagining but I know it would cost a lot of money and we probably don’t need all that space anyway so one hoop will be enough and it would be amazing to finally get it.”

George’s mother Stephanie said: “I was really proud of George. It was a very challenging thing to do to stand up in front of the council.

“It’s great to have the support of the councillors and we look forward to seeing how the project develops.”