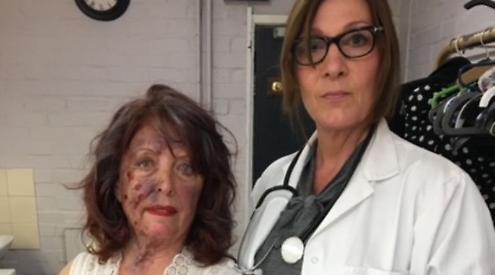 AS the 50th Henley Drama Festival approaches, festival director Ann Dayton is in a good position to celebrate.

She starred in the festival’s very first play, The Sky is Overcast, performed on the first night back in May 1972 by the Chiltern Edge Players.

Ann recalls: “My prospective husband Peter was in it too and we’ve been married 49 years this year.”

Set during the Second World War, the play is about the French Resistance.

Ann says: “It’s a very powerful play. One lady spent the whole show in a wheelchair and never said a word but won the best actor award. The adjudicator said, ‘I have never seen acting and reacting like it’.”

The festival was founded by Ann’s parents, Doris and John Clive-Spencer, who realised that there was a lot of local amateur dramatic societies in the area.

She says: “They thought, ‘We ought to get them all together in a competition or something’ and it sort of happened, then it grew and grew.”

Ann, who succeeded him as director, says: “I’ll never forget his funeral. They didn’t have enough seats in St Mary’s Church.

“We didn’t know how involved he was in other things and it was like everybody came out of the woodwork.”

Ann, who is now 83, is still committed to the festival and has been busy making preparations for this year. Her “right-hand man” Andrej Pandadis is keeping her updated with competitors and documentation.

Former Mayor and Kenton Theatre board member Jeni Wood is the treasurer, while 90-year-old Jill Richardson, a veteran director with the Henley Players, will be the adjudicator. Ann says: “Jill is as tough as old boots but lovely with it. You don’t get round her, over her or under her.”

Ann herself has high expectations. She went on a cruise to Turkey last year and after watching the on-board entertainment, gently suggested a few adjustments to some of the dancers.

For example, she advised one very tall man to buy a pair of black trousers at the next port of call as the ones he’d been given only reached to mid-calf.

Ann says: “The dancers got to know me quite well. They used to come up to me after the show and say, ‘Right, what didn’t we do this time?’” She even befriended cruise ship speaker Jamie Hayes, the original producer of Miss Saigon in the West End and on Broadway.

Ann laughs: “Jamie was doing a lecture on Gilbert & Sullivan and how Miss Saigon came about.

“He heard me once or twice and started sitting with me, saying, ‘I wish we had more like you, observing. People like you are few and far between’. He has been invited to our gala night.”

Local actor Simon Williams has also been invited to the gala night and awards ceremony as one of his plays was performed at a previous festival.

The 2022 festival will feature up to three plays a night, with two on the Saturday. Each play will be between 20 and 50 minutes.

There will be original plays alongside works by names such as David Campton and Laura Lomas’s Chaos, as seen at the Royal National Theatre. A new company for this year is the Limitless Academy of Performing Arts.

Ann says that part of the festival’s success is its setting: “A lot of people come because of the Kenton, as it’s a real stage, and, of course, it dates back to 1805. It’s very old.

“It’s a chance for the youngsters to actually tread real boards, not a village hall or the school stage, but a real theatre. That’s the appeal of the Kenton.”