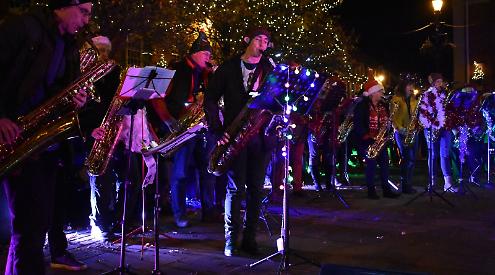 THE Henley Living Advent Calendar is to return.

Organisers had shelved the annual festive fundraiser for the last two years due to restrictions imposed by the coronavirus pandemic.

This will be the 10th year of the event, which features 24 evenings of entertainment at indoor and outdoor venues across the town from December 1 to Christmas Eve.

Calendar chairman Richard Rodway, a senior partner with THP Solicitors, said: “I am aware of the disappointment people had that the event had to be shelved for the last two years.

“If I had a penny from everyone who asked me whether or not it is coming back I would be a rich man indeed. But it just showed me the love and enthusiasm there is out there for the event, with everyone craving that feel-good factor.

“So, it is very much coming back due to popular demand.”

Mr Rodway, who has organised the calendar since 2014, decided to cancel the last two events early because it was unclear what covid restrictions would be in place.

He said: “The last two years I went early in deciding to pull it because I just couldn’t see how it could happen. I didn’t want to put a lot of work in for it to be written off. It has since proved to be the sound decision.

“Last year I don’t think I was in a position mentally to do it and while we could have put something on, it was pretty clear we couldn’t do it as normal.

“You would not have been able to get the same feeling from the event if everyone there was wearing facemasks. That is not the look and feel that we aspire to.

“It can be a headache to put on as it is and then we would have had the added difficulty with covid and the risk assessments would have meant it would be a nightmare to do.

“From my position, we don’t need to reinvent the wheel. The challenge will be to just get into the swing of things again.”

The calendar raises money for a different charity each night through bucket collections.

Mr Rodway said that charities would need to use card readers and set up a JustGiving page as fewer people now carry cash due to covid.

He said: “The most important thing, given what we have gone through, is to help the charities as much as possible as they have been badly affected by the pandemic.

“But in terms of people’s expectations we very much hope that it will be business as normal. A couple of performers have already contacted me and are really keen to do it and I have started to contact the venues.

“What’s pleasing is that sometimes trying to talk to someone about Christmas before Easter isn’t easy but people have been very positive which confirms to me how much enthusiasm there is for it to come back.”

Henley’s living advent calendar was inspired by a similar event in Stockholm and was the first of its kind in Britain when it was launched in 2011 by Julie Perigo. Since then, the idea has spread to scores of towns and cities including Reading, Wokingham and Windsor and places further afield such as York and Doncaster.

Mayor Sarah Miller is delighted that the calendar is returning.

She said: “The living advent calendar is such a wonderful event and I am really excited for it returning as it kick-starts the countdown to Christmas. Most businesses and charities have struggled due to the covid pandemic so this is another good opportunity to support them while also having some fun.”