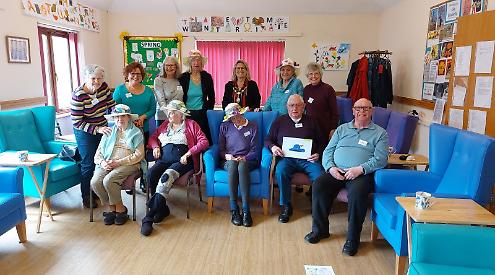 EASTER bonnets made by people suffering with Dementia were judged by the Mayor of Henley at a day care centre.

Mayor Sarah Miller surveyed an array of bonnets made by visitors to Bluebells Day Centre on Thursday last week before deciding on the winners. First prize was awarded to Kay Sermon for the women, and Bill Burrows for the men, with both winners receiving a box of Scottish shortbread.

Visitors to the centre, on Reading Road in Henley, had made the bonnets two weeks previously. Female visitors had used colourful ribbon, crafted flowers, and felt chicks for their Easter creations, while the men had drawn pictures of their designs instead.

Councillor Miller said: “I really enjoyed judging the competition, and the bonnets were lovely. It was a really hard decision, but Kay’s did stand out. The men’s pictures were very good as well.”

Suri Poulos, co-ordinator of the centre, said: “They really enjoyed making the bonnets. It’s such a good group, they’re willing to give anything a go. There’s a lot of laughter here. We often do arts and crafts. We have also made Easter cards.” After the judging, Nadieh Hodgson, owner of the ladies’ retailer Hotfooted Ladies Shoes, presented the centre with a cheque for £730 raised from a charity sale.

The centre is also holding its second “Bluebells for Bluebells” fundraising event on May 8, a woodland walk that last year raised more than £250.