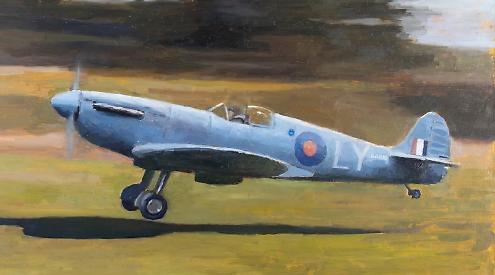 A LIMITED edition print of a Spitfire has been bought by Henley Town Council for £250.

It features the reconnaissance plane, which was assembled near Henley during the Second World War.

Historian and engineer Tony Hoskins, who runs Spitfire AA810 Restoration, is selling 25 of the prints to raise funds for the ongoing restoration of the Spitife

The plane was shot down over Trondheim, Norway, by the Germans in 1942.

Mr Hoskins, from Sussex, recovered the plane, largely intact, from a mountainside near the town in July 2018 and has been restoring it ever since.

The fuselage is set to be completed at the end of this year and the wings at the end of next year. Mr Hoskins, who delivered the print to Mayor Sarah Miller at the town hall, said: “I am delighted that it will hang in the town hall as the plane has such a strong connection to Henley.”

The aircraft was one of more than 500 which were built at Vincent’s Garage in Reading before being moved to the top-secret Vickers hangar at RAF Henley, off Culham Lane, between Remenham and Wargrave.

The Spitfires were used for reconnaissance missions to photograph enemy troops, ships and bases and they were stripped of weapons and armour to accommodate extra fuel tanks.

Councillor Miller said: “Tony gave me the whole history of the plane and it was so interesting. We still have to get the print framed and I’m hoping we will be able to hang it somewhere where anyone can see it. It’s a great piece of history.”

Sandy Gunn, who was flying the plane when it was shot down, was captured and taken to a prisoner of war camp in Germany.

In 1944, he managed to tunnel out of the camp along with 76 other prisoners, the events of which inspired the 1963 movie The Great Escape. Two days after his escape, he was recaptured and executed by the Gestapo.

Mr Hoskins hopes the plane will be fully restored by May 2024, which will mark the 80th anniversary of Mr Gunn’s death.

The print is signed by the pilot’s nephew Alistair Gunn as well as Ben Holmes, who painted the original picture, and Sarah Quill, daughter of the test pilot.