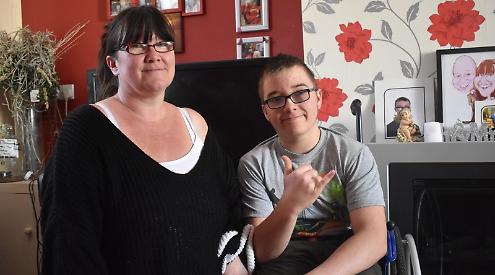 A BOY from Henley was thrilled to be congratulated by his idol on national television after landing a backflip in his wheelchair.

Ben Sleet, who lives on Gainsborough Hill with his parents Michael and Angela, appeared on BBC Breakfast after a video of him performing the stunt went viral.

He is believed to be the first male in the UK to perform a wheelchair backflip.

While being interviewed over video by hosts Naga Munchetty and Charlie Stayt, a pre-recorded video was played of Aaron “Wheelz” Fotheringham, who invented the sport of wheelchair motocross known as WCMX, commending Ben on his achievement.

Ben, who was born with spina bifida and has used a wheelchair since birth, was clearly shocked as he watched the video and hugged his mother.

Mr Fotheringham, who is from Las Vegas, said: “I just wanted to congratulate you for stomping your first backflip ever. It’s not just a huge accomplishment for you but it’s huge for the whole sport of WCMX.

“It has been a privilege for me to be able to watch you, from the first time I met you until now, just to see how much you’ve progressed, how much passion and drive you’ve put into your riding.

“It’s super inspirational for me and for everyone who comes into contact with you, so please, please keep shredding because you’re doing awesome, man. Keep it up.”

Ben met Mr Fotheringham at a 2019 WCMX event in Cologne and says it was through watching clips of him on YouTube that he started doing tricks himself.

“I was literally in tears when they showed me the video,” said Ben. “I was so shocked — they hadn’t told me about it or anything. It was a really nice surprise.

“It made me so proud to see someone I admire so much congratulating me.

“I look up to Aaron so much. Without him, I wouldn’t be doing wheelchair tricks.”

His grandfather John Fahye said: “He has been going down ramps and doing tricks in his chair ever since he was tiny. It doesn’t surprise me that he did the backflip. He’s a natural daredevil.”

Ben had been wanting to try the acrobatic manoeuvre for about a year after seeing clips of Mr Fotheringham and current women’s world WCMX champion Lily Rice performing the stunt.

Ms Rice was only 13 when she landed her backflip in 2017, becoming the first person in Britain to achieve it.

She visited Ben at Henley skate park in 2018 and since then the pair have met up regularly for coaching sessions.

Ben’s parents were able to buy him his own specialist chair after applying for funding to the charity Eight Foundation and he competed in the WCMX World Championships in Germany in 2019, coming fourth in the beginner’s division.

After a few months of training using foam pits and crash mats, Ben and his mother travelled to Ramp World in Cardiff to attempt the stunt earlier this month.

He said: “I got this strange feeling on the morning of the jump that I could do it.

“The key to the backflip was getting enough speed on the run-up. I didn’t lean back as that would have slowed me down. Once you are in the air, it is all about keeping your balance.

“I was so excited when I landed it. I think you can see that in the video. I just started fist-pumping and celebrating.”

Mrs Sleet filmed the moment and posted in on social media and it attracted national attention.

She said: “It has all been a bit of a whirlwind really. We’re really hoping that we can get some sponsorship out of the media attention as it is really difficult to afford for Ben to compete in WCMX competitions.

“He only uses his special wheelchair when he is competing, and God knows what would happen if it broke. It’s worth about £5,000 and we definitely couldn’t afford a new one.

“It’s a shame that there is no national funding for this sport as it is relatively new. You have funding for lots of other disabled sports but we haven’t got any sort of sponsorship so far.

“We are hoping to go to Germany to compete in a competition in July but I’m not sure if we’ll be able to afford it.”

Ben has now set his sights on a double backflip, which only his idol Mr Fotheringham has ever achieved.