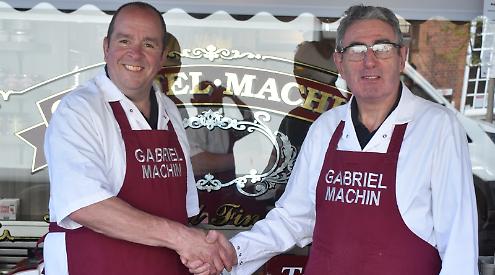 A MAN who helped transform a Henley butcher’s shop is retiring after more than 54 years in the meat trade.

Terry Colby joined Gabriel Machin as an apprentice in 1968 after leaving school at age 15.

He only took the job because his sister Linda was going out with the then owner’s son.

He would cycle into work each day from his home in Wargrave, where he lived with his parents and seven siblings.

Mr Colby, 69, who now lives in Peppard Lane, Henley, with wife Jeanette, said: “I am really glad that this is what I have spent my life doing.

“I didn’t know anything about it when I started in 1968 but it was a job so I took it. We had a big family and I needed to support them.

“It has been an absolute privilege and I still feel like I’m on a learning curve. I have learned so much about quality food over the years.”

The traditional fresh meat shop in Market Place was originally owned by the Marett family.

Colin Marett, who went on to marry Linda, took over in 1971 and with the help of Mr Colby oversaw many changes to the shop.

“When I first started, we only sold fresh meat,” said Mr Colby. “We didn’t even sell bacon — that was the grocers. After Colin took over, we responded to demands for a wider range by selling cured meats, fish and cheese.

“Within five or six years of him taking over, we were selling more than 50 types of cheese.

“A lot of things have changed in Henley over the last 50 years.

“There are far fewer independent shops now. There were seven butchers when I first started. Now it’s just us. I think our quality has kept us at the forefront.

“The thing that sets Machins apart has been our ability to evolve. A lot of other butchers tried to match the prices of supermarkets when they first came in but we chose instead to emphasise the quality of our meat. We have always kept our finger on the pulse and we have been vindicated by being the only butcher left in town.

“During the covid pandemic we started selling more and more stuff online and built up quite a client base. You can’t beat getting the customer into the shop, though.”

Mr Colby has served a number of famous pople during his time at Machins, including television chef Antony Worrall Thompson and Björn Ulvaeus of Abba.

He even sold a turkey to Rod Stewart in the early Eightes.

“It was a Wednesday afternoon, about three weeks before Christmas,” he recalled. “Colin had popped out and the rest of the boys were in the back, so it was just me in the shop.

“Suddenly, the air in the room changed and it just felt like something had happened. Then he was standing there, right in front of me, Rod Stewart and his girlfriend. She did all the talking and then they left.”

In 2006, Mr Colby left Machins after being asked by a customer to start his own farm shop in Stadhampton but the venture did not work out so he left and joined a new farm shop in Wallingford.

He worked there for six years before buying the business in 2015 and setting up Wallingford Butchers with Tom Orpwood.

Mr Colby left in 2019 and was invited to return to Machins by the current owner Barry Wagner.

Mr Colby said: “There was always an emotional tie to Machins. When I returned in 2019, it felt like a homecoming. I’ve seen the business transform over the last 50 years so a little part of me is always with Machins.

“I originally planned to retire next year when I would be 70 but there’s a lot of things I want to be getting on with. I’m looking forward to seeing more of my family, playing billiards and writing a book about my working life.

“The book will begin with my childhood when my love for food started. I used to bake with my mum on a Monday and we would always have a joint of meat on a Sunday. I remember those times very fondly.

“The rest of the book will be about my 33 years with Colin and then how the shop has evolved since he retired in 2001.”

Mr Colby’s final shift is today (Saturday) but he has offered to help out if Machins is ever short-staffed.