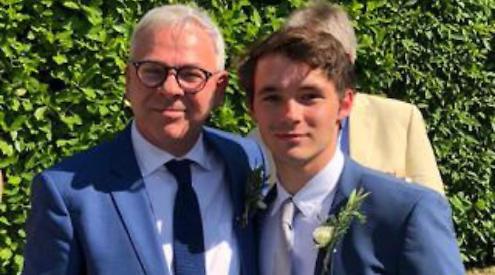 THE family and friends of a young man man who died last year are to cycle the distance between Henley and Singapore to fund a place on a drugs rehabilitation programme.

Sebastian Kelly was 21 when he passed away in August after years of battling addiction.

A virtual fundraising ride called Bike4Bast was launched in his memory and more than 160 people from around the world have signed up to take part today (Sunday).

Jacqueline Kelly, Sebastian’s stepmother, hopes to raise a total of £12,000 which will pay for someone to attend Yeldall Manor, a rehabilitation centre near Wargrave.

She said: “We lost Sebastian last August. He was bright, funny and would do anything for anyone but he just had this problem, an addiction that we couldn’t solve.

“This is our way to try to find a positive in a tragic situation. The idea of Bike4Bast was created by two of his very best friends, Phoebe Cox and Phoebe Finlay, who were at school with him. They wanted to do something to raise some money to help somebody else.

“His lovely sisters, together with his stepbrother and stepsisters, cousins, uncles, aunts, friends and family from all over the world, are getting the Lycra out.

“The distance is 12,000km and £12,000 is enough to put one young male into the Yeldall Manor programme, giving him the chance to get through and, hopefully, beat the addiction.

“The Manor is entirely non-profit and reliant on donations. The majority of people can’t afford to go to rehab and sometimes a three-week course isn’t enough but the Manor has a 78 per cent success rate.”

Sebastian was born and brought up in the Henley area. He lived in Dunsden Green and sang in the choir at the village church.

He attended Rupert House School in Henley and then Moulsford Prep school and was a keen hockey and tennis player.

Ms Kelly first got to know Sebastian when he lived next door to her family and would play with her children.

She said: “He used to come around to my house every afternoon after school and we taught him how to play cricket, tennis and rugby.

“He used to call me his big friend and I called him my little friend, which still happened even after he became taller than me. He was seriously interested in everybody and his friends have said that he was always there for them. He was great fun.”

A few years later, Ms Kelly developed a relationship with Sebastian’s father Paul. In 2012, the family moved to Singapore when Mr Kelly, who works in finance, got a job there.

Sebastian started at Marlborough College in Malaysia but ended up taking his A-levels at Sherborne College in Dorset, achieving B grades in psychology and English and a C in design and technology.

He was offered a place to study psychology at Sussex University but he didn’t complete it.

Ms Kelly said: “Sebastian moved back to the UK when he was 18 because he wanted to spend more time with his close family.

“I think Sebastian started with recreational drugs around his
A-levels and he became more withdrawn and then more clandestine in what he was up to.

“He did go into rehab at that time as he had a couple of overdoses, which was just so sad, but we hoped, with him being so bright, that he would come out the other side.

“Sebastian once told me that he was fighting his demons but at the time he passed away, we thought that he had managed to pull himself together. He had got a job copywriting for a charitable organisation in St Albans, where he was living.

“The night he died, he had supper and said that he wanted an early night and that was it.

“A lot of my peers don’t realise how easy it is to get hold of drugs and a lot of parents are in the dark about it. One of the reasons that we are doing this is because we want to make it clear that it doesn’t matter what walk of life you are from, drugs are dangerous and they are so prevalent in our society.

“If you talk to teenagers, the majority would have a fairly blasé attitude to drugs by the time they reach university as they would have tried some sort.

“Sebastian went to some of the best schools in the UK and Singapore but a good education and a good family life is not always enough. Those who suffer with addiction are very devious in how they hide it. People have this perception that all drug addicts are down-and-outs and live on the streets but that is not the case.

“There are other people who may not do drugs every day but when they do they do it in a big way. The reality of having someone in the family and living with addiction puts an enormous strain on everyone.”

Ms Kelly said she would advise any parent to seek help the moment they suspect a child has become involved with drugs.

She said: “Don’t think that it will sort itself out. As soon as you become aware, seek help. There is a lot of good resource out there. Through the cycle challenge, hopefully we will be able to save someone else. Sebastian would be so supportive of what we are doing.”