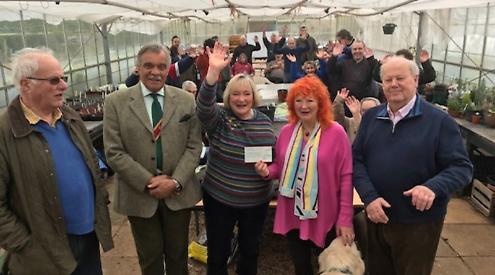 THE organisers of the Henley Farm & Country Show are back in the black.

The annual meeting of the Henley and District Agricultural Association heard that it had made a £14,000 surplus last year.

A total of £5,000 from this has been donated to Wyfold Riding for the Disabled and the Ways and Means Trust in Peppard.

In 2020, when the show and its other events were cancelled due to the coronavirus pandemic, the association incurred a deficit of £1,211.

Treasurer Paul Fairweather told the meeting at Hambleden village hall that good weather and people wanting to get out and about following covid lockdowns helped boost the attendance at the show in September.

He said: “We took the decision to go ahead with the show in late spring or early summer, when there were still many restrictions in place.

“We were keen to make sure the association had reserves but we were able to take the risk and run the show on an open-air basis.

“We needed to reduce the cost in case we couldn’t go ahead and wouldn’t make a massive financial loss so we had much less tentage. This is how we protected ourselves.

“On the day, the weather was kind and people were desperate to get out to events after covid.

“The gate receipts were good and we sold a lot of tickets online, which is the way of the younger generation, and we ended up with a show surplus just short of £14,000. The association is a not-for-profit — we budget to have a surplus for a rainy day so we don’t end up losing a fortune.”

Mr Fairweather said the association tried its best to keep costs down and thanked show manager Jo Taylor for reducing both costs and its energy footprint by working from home over the winter.

Thousands of spectators headed to the showground at Greenlands Farm, off Marlow Road, for the 129th annual event.

Trophies were presented for livestock in a range of classes, including cattle, sheep and poultry. Other attractions included a companion dog show, showjumping classes and displays of classic and vintage cars.

Alan Pontin, who was president of the association, said he had enjoyed his nine months at the helm. He said: “The contributions of people behind the scenes is incredible — it is a wonderful show. Thank you all for the privilege of being president, I have enjoyed every minute of it.

“I would like to ask for a round of applause for this hardworking, dedicated team who put the show together.”

Mr Pontin was formally succeeded at the meeting by Lady McAlpine, of Fawley Hill, who was already a patron. Her late husband Sir William McAlpine was the association’s president in 2010.

This year’s 131st show will take place at the Henley Showground in Hambleden on Saturday, September 10.

The association’s ploughing match and companion dog show will be held in Ipsden on Sunday, October 2.