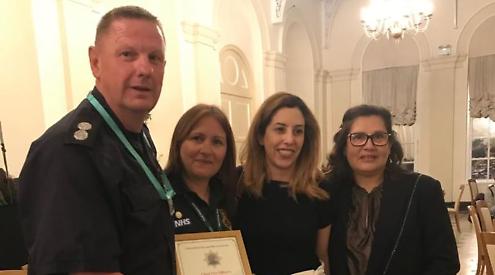 A FIREFIGHTER and his wife have been honoured for coming to the aid of an injured father and son who had been hit by a minibus.

Sean and Sue Absolom, of Iceni Close, Goring, were presented with the chief fire officer’s certificate of commendation at a special ceremony at Blenheim Palace.

The certificate is awarded to members of the fire service, partner agencies or the public for acts of bravery or for performing to a high standard in difficult circumstances.

The couple received the award for their swift actions in the aftermath of the accident in August last year.

Mr Absolom, the on-call watch manager at Goring fire station, was driving along Wallingford bypass with his wife when they saw the father and son waiting to cross the road.

Suddenly the youngster, who was on a toy scooter, lurched forward. His father instinctively rushed to grab the boy but both were struck by a minibus.

Mr Absolom, 57, braked and ran to the scene with his wife. As a firefighter, he is trained in first aid while his wife is a volunteer community first responder for South Central Ambulance Service.

With no equipment and no immediate back-up, the couple prioritised treating the child who was unconscious with blood coming from his ear.

Mr Absolom dialled 999 while his wife stabilised the boy. She also intervened to stop a passer-by who wanted to move the child, saving him from further injury. Mrs Absolom, 52, said: “We did our jobs, what we are trained to do.

“I kept him stable enough to hand over. The intervention really did save his life. Having held him as I did, I will always feel I have a connection with him.”

Mr Absolom spoke to a paramedic on his mobile, using the phone’s camera so images of the injuries could be relayed to an oncoming ambulance crew.

His wife stabilised the little boy until help arrived after about 10 minutes in the form of two helicopters and three ambulances.

After the incident, Mr Absolom received a phone call from the boy’s mother to say that he was on the mend.

She also told him that the surgeon had advised the family that the couple’s prompt intervention had probably saved the life of her son.

Mr Absolom said: “In our roles we do not usually see the accident, so seeing it all happen in front of us was very hard to process for a while.

“Having a little boy myself, I don’t know how any parent can go through that.”

The couple’s son Charley, 10, who was in the car with them, messaged his older stepbrother Ryan to come and pick him up.

Mr Absolom said: “That was very mature for a 10-year-old and we were very pleased to have him taken away from the scene.”

He added: “At the presentation the little boy’s mum appeared with a bouquet of flowers. There was not a dry eye in the house. It was very emotional.”

“I am really pleased we can honour their selfless actions in how they dealt with this emergency.”