Widower who loves to feed wildlife and passing dogs 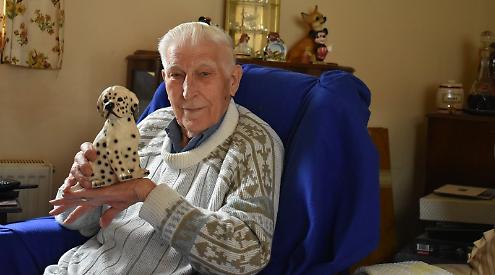 AN elderly man from Henley has created a treat station for dogs and birds outside his home.

Arnold Light, 86, has been providing free bags of chews to dog owners and maintaining cages of bird feed outside his house in Church Avenue since Christmas.

He says he is doing it for his wife Doreen, who passed away in 2014, as the couple had always wanted pets but were not allowed them by their landlord.

Arnold, who has lived in Henley for more than 50 years, said: “We’re not allowed to keep pets in the house, so that’s why I started this whole thing. I like to think that they’re my pets out there.

“My wife was always a dog person and I always liked cats. Unfortunately, we were never able to have either, which is part of the reason I am doing this.”

Arnold had the idea before Christmas after watching dog owners passing by from his window. He said: “I was sitting in my living room one day, about a fortnight before Christmas, and saw a man walking his dog past the window.

“ I thought it might be a good idea to set up a treat station, so I got some Boneo dog treats and wrapped them up in Christmas paper. I wrote a note, saying ‘Please take one for a Christmas treat’ and they all went.

“I kept it going after Christmas. Then the other week, someone asked if I was going to do anything for Easter. I can’t give the dogs Easter eggs, so I got some nice new chews that are different shapes like a fish or a heart.

“Sometimes people knock on the door to thank me. Other people leave cards with pictures or drawings of their dogs.”

Arnold was born in Nuffield in 1935 and worked at a grocers in Henley when he was a teenager. He met wife at her 21st birthday party at a pub in Henley and they were married in St Mary’s Church in 1964, just a few hundred yards from where he lives today.

Arnold was in a signaller in the Royal Air Force for three years for his his National Service.

He then returned to Henley and worked for a removals firm until his retirement in 2000.

Arnold said: “A couple of weeks ago I thought autumn had come early as all the leaves were falling off the tree outside. Then I looked up and saw all these blue tits in the branches. There were hundreds of them.

“There’s a couple of squirrels who are pretty regular as well. I call one of them Stumpy because he only has a half a tail. There’s even a woodpecker who comes every now and then.

“I can sit for hours just watching the birds and the dogs outside. Sometimes people will leave a bit of money, normally just 10p or 50p. I use the money to help sponsor the Dogs Trust. I’ve adopted a terrier cross called Botie.”

Sara Abey, who has befriended Arthur, said: “Dog and bird treats have been in the churchyard for a while and I always thought it was something the church did.

“Then I got chatting to Arnold and found out that he is the wonderful Samaritan behind it all. A chat with him always uplifts my day.

“He is usually on his knees cleaning and growing flowers around the graves. Arnold doesn’t know whose graves they are but he wants to keep them lovely.

“He is a real animal lover, which is what led to him to create this charming dog and wildlife sanctuary.”

Arnold still works every Saturday as a room guide at Nuffield House, the National Trust property, where he talks to visitors about the house’s former owner Lord Nuffield, the founder of Morris Motors and a philanthropist.