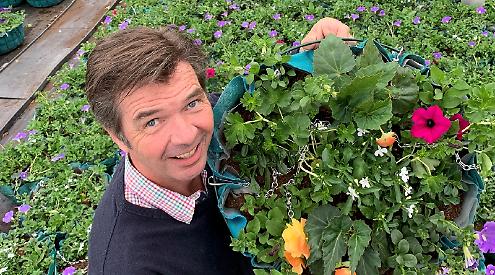 A TOTAL of 177 summer hanging baskets has been bought by residents and businesses in Henley — and there’s still time for others to follow suit.

Henley in Bloom is selling the attractive flower baskets as part of its annual campaign supported by the Henley Standard.

WindowFlowers, which is based in Burnham, will supply and install the baskets at the end of this month and in early June and then maintain them all summer.

Town councillor David Eggleton, who chairs Henley in Bloom, said it was “blooming marvellous” to be nearing the 200 mark in basket sales.

“We are still a little way off the record but I think we stand a chance of beating it this year. I strongly encourage any residents and retailers who haven’t bought one yet to consider doing so.

“They give the town a real uplift and are great for the environment.”

The baskets each cost £71.20, which includes maintenance and watering, while the brackets to hang them cost £33 each.

Alison Kinna, who moved to Henley in September, has bought one to hang outside of her house in Northfield End.

She said it was seeing the baskets previously that helped convince her to move to the town.

Ms Kinna said: “When I was looking at houses, it was the time all the hanging baskets were out. I just thought they made the town seem so colourful and vibrant.”

John Glen, who lives in Ravenscroft Road, has also bought one basket.

He said: “It’s a brilliant idea and makes the town look so pretty.

“I really like the flowers they have picked this year. They’ll look great and will lift the general mood of the town.”

Owner Joy Blogg said: “I buy the baskets each year because I like the shop to look pretty and pleasant.

“I think it gives a real morale boost with all the lovely flowers on display and it’s great they are watered each day by WindowFlowers. It is without a doubt worth the money.”

She said: “I think they look really nice. They are so well maintained, and they make Henley look quite beautiful.

“They are definitely worth the price as they are looked after so well. They just bring some real colour to the town.”

Nick Lockett has bought a basket for his house in Vicarage Road.

He said: “It creates a much more colourful town and makes Henley a lovely place to live in the summer.

“The baskets seem really good value what with the maintenance thrown in and how long they last.

“I’ve never had one before and it was seeing everyone else’s looking so great last summer that convinced me it was worth it.”

He said: “I think it sends a positive message to the community and is a real benefit to the town.

“For a place where there is a lot of footfall I think it will brighten people’s day when they see it.”

To order a basket, fill in and return the form printed here or request a form from Trish Rae at the town council. Email t.rae@henley
towncouncil.gov.uk