Couple claim man kicked their dog while on walk 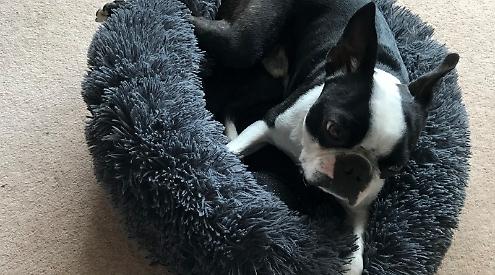 A COUPLE claim their Boston terrier was kicked by another dog walker.

Cara and Becca Cummings say the man kicked two-year-old Nobby as they were walking their two dogs in the grounds of Soundess House in Nettlebed.

The couple live in London but were visiting Mrs Cummings’s mother in the village when the incident occurred on Monday last week.

Cara Cummings, 36, said: “We were walking along a footpath and there was a family ahead of us — a large bald man and whom I presume was his wife and two girls, who looked under 10.

“They were walking towards a road at the end of the footpath. They had two dogs, both small and reddish. One of the dogs, a cockapoo, had dropped back to play with Nobby.

“It was all very friendly, just chasing and sniffing. It was a little bit vocal but anyone who has dogs knows that is normal.

“They then both went ahead to the family walking in front of us to continue the game. The man ahead of us then turned around, walked over to Nobby and kicked him. The force of the kick was such that Nobby was lifted off the ground and landed across the road. The immediacy and extremity of the violence in such an inappropriate situation was shocking. I didn’t know how to react. My wife immediately started shouting at the man. Our other dog, Baxter, was cowering behind us.”

Mrs Cummings said the man told her, “Your dog is aggressive. He should be on a lead” and that he had been “protecting my dog and my family”.

She used her phone to film him walking away but chose not to follow him for fear of putting her own safety at risk. Mrs Cummings said: “Nobby had got up at this point but he was crying and was clearly in pain. He was shaking and trembling.”

The couple went back to Mrs Cummings’s mother’s home and have since returned their home in Lambeth.

She said: “On what planet is it okay to kick a dog, let alone someone else’s? My wife and I were incredibly shaken up and still are. Nobby is still very sore — you can see that he is still holding his back leg, which took the brunt of the impact. We feel we deserve an apology. My wife was so upset and shocked when it happened and she is just very angry now. It’s a horrible thing to happen on what should have been an enjoyable day.

“We feel very strongly that this man, whoever he is, poses a real threat to other dogs and dog walkers in the area.”

Mrs Cummings said the couple had not reported the incident to the police as they did not want to waste their time.

A man contacted the Henley Standard to say he was involved but denied kicking Nobby.

He said: “Their dog approached ours and they started to run around in a circle as dogs do but then their dog started getting very snappy and pushing our dog against a fence.

“I put my foot on the floor in between them. I didn’t kick the dog, it just ran into my leg. The couple were not paying attention but I can understand how it may have looked like what they thought they saw.

“Afterwards we saw that our dog had a couple of puncture marks on one of its ears which were not there before the walk and so I am certain it was their dog that caused them.”