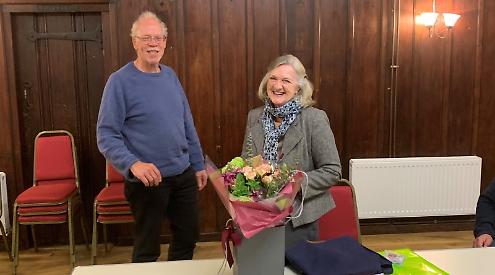 A FORMER chairman of Nettlebed Parish Council has stepped down after 23 years of service.

Barbara Lewis, 82, said she felt it was time to put her energy into her family, which had proved difficult when her time was taken up by parish duties.

She was elected to the council in 1999 and 10 years later became chairman. She remained chairman until 2018 and was vice-chairman when she retired.

Mrs Lewis, who lives in Pearces Meadows, Nettlebed, with her huband Malcolm, 87, said: “It has been a case of using my education and hopefully my talents the best way I could.”

“In terms of what I feel we’ve achieved is having the village looking the way it does now.

“If we had just allowed ourselves to be ruled by planners who wanted to tick boxes, it wouldn’t look like it does now. I think it looks a welcoming village.”

She is also proud that the village primary is school is “buoyant” with the number of pupils at about 130, having previously fallen below 100 following a fall in birth rate in the Eighties.

“Family is hugely important to me,” she said. “They have always been my high priority but a lot of this has side-tracked me over the years.”

The couple lost their son Charles Bertioli in a car crash in 1996 when he was 19.

Mrs Lewis was born in Cheshire and went to the pre-war Modern School of Cheshire.

During the war, her father did secret work with an ammunitions factory and after the war he was headhunted for a job in Parbold in West Lancashire, where the family then moved to.

She went to Ormskirk Grammar School, where her father was on the committee.

Her father passed away when she was 15 and she says he had inspired her to work hard.

She went to Edinburgh University to study georgraphy and became the first female president of its geographical society.

She began her career in market research for the Beecham Group, now GlaxoSmithKline. She moved to Nettlebed in 1977, the same year that she married.

One of her aims when she joined the council was to set up an educational trust for the village school and wider community and this has just been by approved by the charity commissioners.

Mrs Lewis said: “That was the final piece of the jigsaw that really brought me in in the first place and I couldn’t be more delighted.

“It will be the Nettlebed Educational Trust. It will be for the benefit of not only Nettlebed school but also for young people with a Nettlebed connection up to the age of 25 to apply for help if they need it.”

Mrs Lewis was also a member of the parochial church council for more than 20 years until 2009.

He was a passenger in a Renault Clio which left the road, hit a tree and overturned. Another passenger, Paul Hayward, from Cold Ash, near Newbury also died.

Some of his own organs were used in lifesaving transplant operations as he used to carry an organ donor card.

Following his death, his parents and friends set up the Charles “Berti” Bertioli Staying Alive Foundation to raise money for the renal unit at the Royal Berkshire Hospital in Reading, where he had been treated since childhood for kidney disease.

To date, the charity has raised £175,000, which has helped the hospital to fund lifesaving equipment and machines.

Mrs Lewis said: “We miss him like crazy, we all do, but he is still with us, he helps keep us going.

“We have happy, wonderful memories of him and we treasure those. They keep us going sometimes, particularly in tough years.”

She added: “As long as I’m here, Nettlebed will always be an important part of my life.”

Parish councillor James Leach said: “Barbara’s service over many years to both the parish council and to Nettlebed in general was outstanding.

“She will be much missed for both her knowledge of Nettlebed and near encyclopedic memory of previous decisions and initiatives, together with the support and guidance she gave to all new councillors.

“Fortunately for Nettlebed, Barbara will still be in the village with her knowledge and wise counsel on hand. We wish her all the best in her ‘retirement’.”