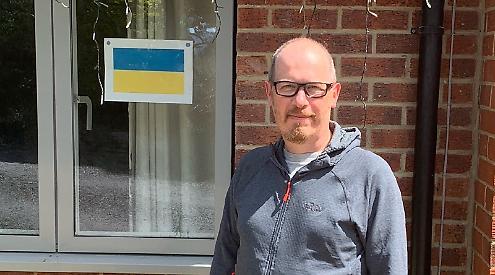 A MASS display of Ukrainian flags in Caversham has been organised by one man.

John Cracknell, 54, a charity consultant, printed more than 1,000 A4 paper copies of the country’s blue and yellow flag and posted them through the letterboxes of homes across the areas with a note encouraging people to stick them in their windows.

He estimates that about 300 households are now displaying the flags, which are intended to show solidarity with the war-torn country.

Mr Cracknell, who lives with his partner and children in Caversham Heights, said: “The idea came from the rainbows people put up in their windows for the NHS and the England flags that are put up during football tournaments.

“On the morning the war started, I printed a flag off and put it in my window. I wanted to immediately express solidarity with the people of Ukraine as I was so appalled by the actions of Russia.”

Mr Cracknell and his neighbours had formed a WhatsApp group for the street during the coronavirus pandemic and he chose to tell others what he was doing. “I decided to post it on the group and everyone really liked the idea,” he said. “They all started requesting the flags, so I printed off a few more and delivered them to people’s houses.

“It became so popular that I thought it shouldn’t just be our road and so I started dropping off flags to people all over Caversham Heights. There must be close to 300 houses that now have the flags displayed.

“It makes me incredibly proud to walk down the street and see the flags in people’s windows. Some people have sent me texts to say thank you and others catch me on the pavement after I’ve posted a flag through their letterbox.”

Mr Cracknell downloaded the Ukrainian flag image from the internet and printed copies at work.

The flags now cover most of Caversham Heights and large areas of Caversham, with the highest concentration in Blenheim Road.

Paul Bellingham, who lives in Blenheim Road and is displaying a flag, said: “It is all about showing solidarity with people in Ukraine and expressing that solidarity as a community.”

Caroline Prodger, who also lives in Blenheim Road, said: “It’s great that John has done this and it makes me feel very proud of our community that people are willing to show such support.”

Although the support has surpassed Mr Cracknell’s initial expectations, he believes the initiative has room to grow.

“Ideally, we would have flags all over Caversham,” he said. “That’s what it is like in Oxford and when I was in Berlin at Easter, there were flags everywhere.

“It would be great if the surrounding towns like Henley would so the same.”