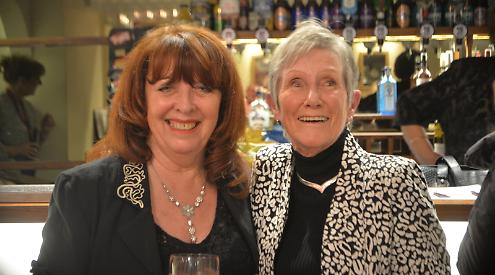 THE Kenton Theatre in Henley is recovering well from the coronavirus pandemic.

The historic venue in New Street was closed from the first lockdown in March 2020 to July last year and relied on government grants to keep going.

But now it has a full programme of events once more and will be a venue for this year’s Henley Literary Festival in the autumn for the first time since 2018.

Also returning is Muffin Hurst’s Henley Children’s Theatre, having previously fallen out with the theatre over the dates and hire costs for her Christmas pantomime.

The Kenton will also welcome back James Tobias and Rochelle Parry, of Immersion Theatre, with Aladdin in December, having lost money on last year’s pantomime when many people cancelled their visit due to the outbreak of the omicron strain of the virus.

The annual meeting of the Kenton trustees heard that the theatre had also attracted some new customers and events, such as the Maidenhead Musical Comedy Society, which recently presented The Wizard of Oz.

Julie Huntington, who chairs the trustees, said: “This past year has been such a roller-coaster with so much uncertainty since opening the doors last July.

“Now we are coming out of the phase where the Kenton was fighting for its survival and we are very excited to be working on big plans for the future.

“We are committed to building our reputation as a vital and vibrant hub for arts, education and entertainment, both within the local community and nationally.

“We still need the support of all of our friends and colleagues, our audiences and visiting performers but we are really starting to put the Kenton Theatre on the map.”

Simon Spearing, operations manager, said: “We are still in the recovery phase and we can’t deny that these last 12 months have been difficult and full of surprises.

“The first recovery phase has been to distribute brochures, making people more aware of the theatre, and the second phase, the ‘reimagining phase’, is to better engage with audiences and the community.

“We can’t do this in isolation, it needs to be a whole community effort. It takes a village to raise a child and that’s the position we’re in, we can’t have just one or two people coming up with ideas.”

Mrs Huntington said: “What has always surprised me is that some people who live in Henley don’t even realise there’s a theatre here.

“So we’ve decided we should shout about this place. It’s the diamond in the crown of Henley.”

The Kenton Summer Roadshow, a series of outdoor performances last year when the theatre was closed, will be back this year with five new productions, including Rapunzel and The Pirates of Penzance.

Mrs Huntington said: “My biggest take from people coming back to the theatre was that they were desperately in need of entertainment.

“I realised that people would be reluctant to come into the theatre, taking the risk of their health in their hands, and so the Kenton Theatre Summer Roadshow was born.”

The theatre also wants to become a platform for more artists who are creating new works.

Mr Spearing said: “The idea is that with the network of contacts that we’ll build, we can start to produce our own work and take that out on tour and different venues to just extend our reach and ensure that the name of this theatre becomes more widely known.”

A summer school will also be held this year with subsidies available for children of families who can’t afford the attendance fees.

The theatre is also continuing its community fund to help schools, drama groups and workshops to hire the venue.

Twenty-five pence from each ticket sold for shows goes towards the fund, which also accepts
donations.

Organisations wanting to use the theatre can apply for a grant from the fund towards the cost of hire.

Piers Burnell, a trustee, came up with the idea in order to make the theatre more inclusive and accessible and kick-started the fund with a donation of £1,000.

As of September, the price of tickets will be all inclusive rather than there being an additional charge for the restoration fund and booking fee.

Trustee Judith Terry, who co-ordinates the theatre’s volunteers, said: “We need more and more people. You don’t have to have any experience — we can train you.

“This is a brilliant place to work. I don’t live in Henley but I genuinely know more Henley people than I do where I live. It’s just brilliant.”

Nansi Diamond, a former chairman of trustees who has been involved with the theatre since 1960, said the Kenton “gets in your blood”.

She said: “I cannot get over my excitement at seeing seven trustees who all want to be there.

“For years and years, it has been nothing but ‘Oh God, I don’t want to be a trustee’ but here you are saying you’re proud to be on it. Thank you very much on behalf of the Henley population.”

But she added that becoming a member was difficult and communication needed to improve.

There was also an issue with older people with limited hearing not always being able to hear everything at shows.

Mrs Huntington said there was information on becoming a member in the new brochures and that technician Hugh Legh was looking into headsets.

About 40 of the 160 members attended the meeting, which was held in person and online.

Mrs Huntington was re-elected as a trustee, David Rusman was elected treasurer and Steph Maxwell was voted in as a new trustee.

Mr Rusman is an accountant and has worked in Henley for almost 30 years. He has been involved with many local organisations, including the Henley Chamber of Commerce and the Henley and District Theatre Organ Trust.