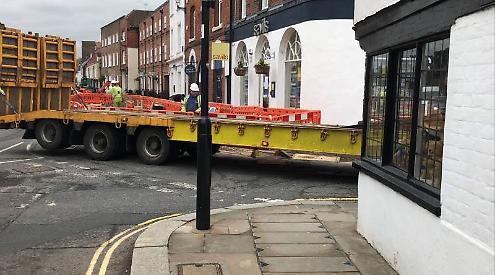 A BAN on heavy goods vehicles passing through Henley could be back on the table.

It comes after the councillor who effectively scuppered the idea came to see the problem for himself.

Oxfordshire County Council, the highways authority, angered campaigners earlier this year when it announced it would focus on a county-wide strategy for HGVs rather than imposing weight restrictions in individual towns and villages.

This followed a decision by Duncan Enright, cabinet member for travel and and development strategy, to revoke a 7.5-tonne weight limit on Burford Bridge, which was identical to the one planned for Henley.

Some councillors, including Henley’s representative Stefan Gawrysiak, challenged the decision but the council’s cabinet voted to uphold it.

But Councillor Enright accepted an invitation from Cllr Gawrysiak to accompany him on a visit to the junction of Bell Street and New Street to witness the problem in person.

Campaigners say HGVs pose a risk to pedestrians and damage the town’s streets and historic buildings because they mount the pavement and their wheels generate heavy vibration and they add to the air pollution problem. Cllr Gawrysiak told a town council meeting: “The aim was to show Duncan the true impact of HGVs on Henley.

“We toured the whole town centre and Duncan saw the problem and it resulted in him saying, ‘I saw enough whopping lorries to see for myself the problem’ so he acknowledged it.

“Now county council officers are working on an area strategy.”

He said the council had dropped the idea of having a weight limit in specific places and instead was considering a 18-tonne limit for an area that would include Henley and part of South Oxfordshire.”

Cllr Gawrysiak said that a bollard would be installed on the corner of Bell Street and New Street to protect pedestrians from lorries mounting the pavement.

Councillor Will Hamilton replied: “I don’t know how long the bollard will last but good luck to it is all I’ll say.”

He then complained about the condition of some of the town centre roads due to potholes, particularly in New Street.

Cllr Hamilton said: “Yes, lorries go down it but if you go to the King’s Road junction it is shocking too and if you go up Greys Road there are broken sets. Down Marlow Road there are potholes and Northfield End is bad as well.”

He said the roads in Wokingham borough were in a much better condition.

Cllr Gawrysiak said there was no point in fixing the potholes in New Street as the road would soon be resurfaced from the roundabout near Rupert House School around to Thames Side.

“I will produce a full report on potholes,” he said. “I am absolutely convinced that as many potholes were fixed under the old administration as under the new administration and I think we have a very good record on fixing potholes.”

He called the argument that Wokingham dealt with potholes better than Oxfordshire an “old chestnut”.

He said: “The potholes in Wargrave and Twyford are just as bad as Henley’s.”

•Oxfordshire County Council announced this week that new cabinet member Andrew Grant is taking over the highways portfolio. He will be responsible for issues such as highway delivery operations, network management, public rights of way, walking and cycling infrastructure, street lighting, 20mph speed limits and parking.