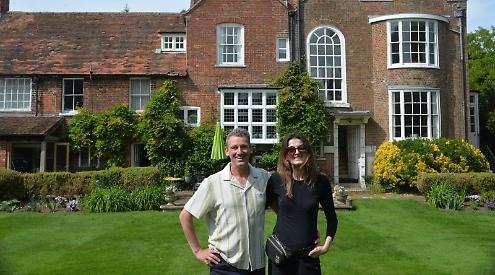 A HOUSE that belonged to the founder of Upper Thames Rowing Club and is a stone’s throw away from the Henley Royal Regatta course is being sold, writes Phil Simms.

Bird Place, which is near Henley Bridge, has been in the Sutherland family for more than 50 years and has the royal regatta headquarters as its neighbour.

The late Peter Sutherland and his wife Diane bought it in 1968, five years after they launched the rowing club, and their son Justin lives there now with his wife Nicola and children.

Mr Sutherland said: “Clearly one of the most significant houses anywhere on the Thames, and certainly in Henley, Bird Place has played host to many a celebrity guest over the years.

“Boris Johnson has been a regular visitor and his predecessor Theresa May has also been known to pop in from time to time for a cup of tea.”

The 10-bedroom riverside property is set in grounds of more than two acres, with 400ft pf private moorings and a creek suitable for punts and dinghies. Some of the rooms date back to the Victorian era, while others were added more recently.

In the Forties, Dr Thomas Staines Read owned Bird Place and he treated his patients on the ground floor before moving to the Hart surgery in York Road.

Bird Place has welcomed hundreds of illuminati from the rowing world, including Olympic champions such as Mahe Drysdale and Sir Steve Redgrave, who now chairs the royal regatta.

Peter Coni, a previous chairman, stayed at the house for many years, as did countless international and schoolboy crews.

Mr Sutherland said: “The Russian minister of justice, an avid oarsman, has been a friendly presence in recent years and many of the great Russian crews of yesteryear have come to regard Bird Place as a home-from-home during the regatta season.

“Bird Place has been a venue for numerous garden fetes and exhibitions, welcoming luminaries from the arts such as Sir Tom Jones and Simon LeBon.

“One has the feeling of being completely secluded at Bird Place, enveloped among large poplars and hornbeam, with horse chestnuts, rhododendron and laurel hinting at a sense of secret garden.”

The property is on the market with estate agent Bovingdons. Price on application.