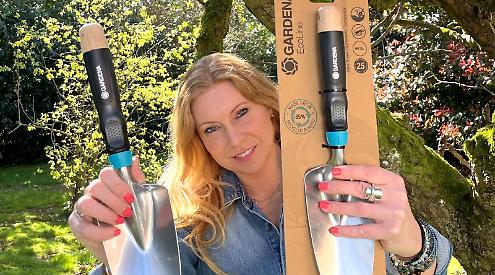 AN environmental campaigner from Peppard has created a garden at this year’s Chelsea Flower Show.

Lynne Lambourne, 47, has used it as an opportunity to highlight sustainable practices and inspire people to reuse and recycle.

The 20m by 10m garden was commissioned by gardening tools supplier Gardena to coincide with its own campaign pledge to “reduce, repair and recycle”.

Ms Lambourne, an interior designer, has themed the garden around rewilding and the idea of nature taking back control of the planet.

She said: “It is a garden with a thought behind it, to make you stop in your tracks and make you think about nature. I’ve tried to shift you from the idea of there being a climate crisis to you becoming more climate-conscious.

“It’s all about bringing the ecosystem back to life — we can start in our own backyard and adapt our everyday lives for the good of the planet.”

The garden will have an old petrol pump, some old electricity boxes and upcycled pieces that Ms Lambourne has salvaged from in and around Henley.

“There will be an old shopping trolley and baskets that I will be planting up to show how we should focus on growing rather than wasting food.

“I have also bought an old chair from the British Heart Foundation and I will be making a bench from old breeze blocks. I have been out searching in skips around Henley and taking trips to building sites and working on tip-offs if someone spots something.

“I’ve been taking bits of wood such as floorboards and old bits of decking and I will be using this to build a wall.

“It is not a garden where you can buy everything. A lot of it is made or salvaged by me and I bought a lot of the plants from the Ways and Means Trust in Peppard.”

Ms Lambourne, who has two children, Kate, 14, and Grace, 17, who attend the Oratory School in Woodcote, had to agree on the garden design with her client as well as the show organisers.

She said: “I sat down with the company and presented my vision to them and made sure I had interpreted the messages they wanted to get across in the way they wanted.

“We have been working on it since October and we have also had to get everything approved by Chelsea, too.

“We started building it on Wednesday last week and have to get it finished by Sunday, when it will be judged. The royal visit will happen on Monday and press day is on Tuesday.

“I will use every minute of those 11 days as I am having to build everything but I am getting some help from Wayne Perrey, a carpenter who has worked with Alan Titchmarsh.”

Ms Lambourne, who was named Grand Designs interior designer of the year in 2017 for a living room featuring upcycled furniture and recycled materials, says that once the show is over the idea is to reuse as much of the garden as possible.

She will share some items with a school she has been designing a garden for while other bits will be sold and many of the plants will go back to the Ways and Means Trust to be resold.

Ms Lambourne said: “Nothing or very little will be wasted because that’s the whole point. It’s time our gardening practices helped the planet come from climate crisis to climate-conscious.”

The Chelsea Flower Show runs from Tuesday to next Saturday. Ms Lambourne’s display will be at stand PW246a.