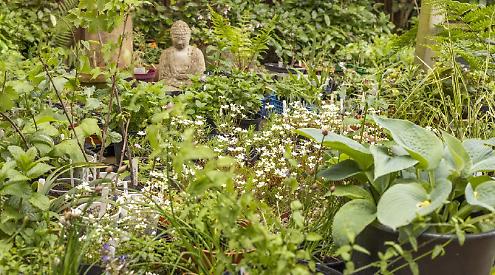 A WOMAN is running a week-long plant sale to raise money for the people of Ukraine.

Gail Spence, 72, of Albert Road, Caversham, is staging the fundraiser in her garden with all the proceeds going to the Disasters Emergency Committee’s appeal.

Gardeners and allotment holders around Caversham have been donating garden and house plants for the sale, which runs from today (Friday) to Thursday.

Mrs Spence, a retired antiques dealer, said she was expecting hundreds of people to come to the sale as she had been working hard to promote it.

She has been delivering flyers with her husband Alan, 77, and daughter Nicola, 47, around Caversham.

She said: “We have so many people helping us to spread the word, perhaps around 40. They are a mixture of friends and neighbours but also people we didn’t know who got in touch saying they wanted to help.

“The response has been wonderful. We’ve had dozens of people getting in touch saying they will be donating plants. It has been hard to keep track.

“A lot of people are also bringing along plants from their friends and neighbours as well as their own stuff.

“It has all gone a bit mad and has wildly surpassed anything we expected. I have been overwhelmed by the response from the community.”

Mrs Spence came up with the idea in March while gardening with her husband, who is also a retired antiques dealer. She said: “We were looking at all these plants in the garden that we were thinning out and wondering what to do with them. I had the idea to stick them out the front and for people to donate.

“It was just after the Russian invasion, which was breaking my heart. I couldn’t watch the news anymore. It was horrifying to see millions of Ukrainians facing fear, misery and an unknown future.

“I decided to just not watch the news and instead do something to help, which is why I chose to raise funds for the Ukraine appeal.

“People were so generous. They would take a couple of small plants and leave a £15 or £20 donation. The response to this little sale was terrific and it raised £441.

“Following that, we thought that if we really went for it, we could make it big. That was when we started planning for this sale.”

As well as plants, Mrs Spence has also been accepting other
donations.

She said: “We had people coming to us saying, ‘I’m not much of a gardener, could I bring cakes instead’, which I thought was a great idea.

“Then we started going around businesses asking for donations and they have all been so supportive.

“For example, we were given two tickets for a meal at The Mill at Sonning, which will be available in a raffle.”

Mrs Spence’s only concern is whether her garden will be big enough to accommodate everyone who comes to the sale.

She said: “It is not a massive garden and we don’t know how many people are going to come.

“Our neighbours have been so supportive. They are letting us use their gardens to store the back-up plants as there are just hundreds. They have been tremendous and so happy to do it.

“We have got a marquee and a gazebo just in case the weather gets bad and we will also be using our garage.”