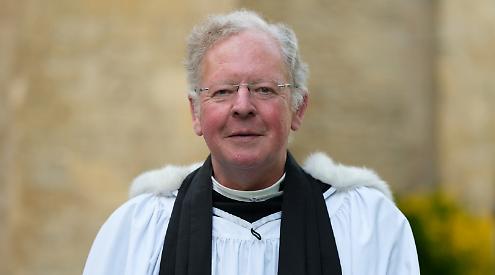 THE Vicar of Wargrave and Knowl Hill has been honoured by the Diocese of Oxford for his commitment and hard work.

Rev John Cook was installed as an honorary canon at Christ Church Cathedral in Oxford, by the Bishop of Oxford, the Rt Rev Dr Steven Croft, at a special service on Saturday.

The 62-year-old was one of four new honorary canons who will join the cathedral’s College of Canons and play an important role in bringing experience and wisdom to promote the life and mission of the cathedral.

The Rev Cook, who has been Vicar of Wargrave and Knowl Hill since 2008, said: “I feel very privileged to be made an honorary canon and it was such a surprise to receive the letter.

“I think this says as much about Wargrave and Knowl Hill as it does about me — it is a joy to serve the community alongside a dedicated team.”

The Rev Cook knew from an early age that he would be called to a life in the church.

He explained: “When I became a Christian believer as a teenager, I had no idea what I wanted to do but I felt more and more that I wanted to spend my life telling people about Christ.” In the early Eighties he was ordained as a curate in Derbyshire, where he served for four years during the miners’ strike, a difficult time in which families were divided by the bitter industrial dispute.

He then moved to St Peter’s Parish Church in Farnborough as a curate and youth chaplain.

He went on to be an assistant minister and director of training at All Souls’ Church in Langham Place in London, where he stayed for seven years.

Rev Cook stayed in London with his next move when he became the vicar at St Andrew’s Church and St John’s Church, World’s End, Chelsea.

“The church there was actually closed when I arrived.”

After 10 years, he took up his present post in Wargrave where he has been for the last 13 years.

Rev Cook has a keen interest in education. He is a governor of Piggott School in Wargrave and supports the other Church of England schools in the parish.

He said: “There’s always work to be done and challenges to face but I am very fortunate here with my colleagues and our church family.”

Rev Cook has also been on the General Synod, the church’s national assembly, for 20 years, 15 of them while in London and five in Wargrave.

He is married to Camilla and the couple have two adult sons, George and Tom.

To relax, he loves fell walking and walking his dog and enjoys reading widely, especially biographies.

Speaking after Saturday’s service, The Bishop of Oxford said: “It is a real honour to be able to award people for their commitment to the diocese, the wider church and their communities.

“The outstanding work they have demonstrated in their service of Christ and contribution to the common good is admirable.

“We are blessed in this diocese to have so many dedicated to sharing the love of God.”