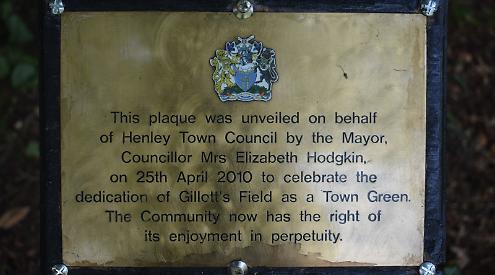 “IF you want to get ahead, get a hat”. That is the motto of master signwriter Norman Ingram, a familiar figure in Henley who always sports a trademark feather in his hat.

His work has graced shopfronts and pubs across the town for years and was also seen with the painted floral train in Station Park for the Britain in Bloom competitions.

His latest contribution was to refurbish the plaque commemorating the dedication of Gillotts Corner Field off Greys Road as a town green in 2010 to prevent it from being developed.

Norman 79, took away the brass plaque, removed the old varnish, polished the sign and refilled the lettering before putting it back in place on its wooden post.

Elizabeth Hodgkin, a former mayor who unveiled the original sign when the land was designated a town green, said: “We should all be very grateful to Norman for taking the initiative to refurbish this plaque, which reminds users in the present and future of the importance of a town green and how forward-thinking councillors preserved and nurtured this precious asset.”

The field was bought by the town council during the Nineties following a campaign by residents and councillors to protect it.

South Oxfordshire District Council had earmarked the land for between 300 and 450 homes but several planning applications were turned down before the town council decided to buy it.

To mark the millennium 2,000 native trees were planted which today form a strip of woodland for people to walk through.

Now there is also a management plan for the field to encourage wildlife.

Mrs Hodgkin added: “With the redevelopment of Highlands Farm it is a welcome relief to have this buffer to what will eventually be a substantial housing estate.

“Norman approached me and said he had noticed the sign was looking very tired.

“Over the years he has obviously been keeping an eye on it. I was worried it may fall into disrepair and people would forget about the fact it is so precious and a green lung for the town.

“During the lockdown it became so important to many people and was discovered by lots of residents.”

Norman, who is married to Patricia and has lived in Henley for almost 50 years, was artistic as a child and his great grandfather was a painter whose pictures of dogs hang in Buckingham Palace.

His father wanted him to become a motor mechanic like him but he wasn’t interested. Instead he became an apprentice with Hovis McDougall.

During his career he has had a variety of work, including putting details on prestige cars for Hofmann’s of Henley, restoring vintage vehicles and painting horse-drawn carriages.

He worked as a postman for several years after inhaling paint while spraying a fire engine in Reading, which meant he had to work outside.

Norman said: “I have been pretty busy in my lifetime. I have worked for so many different people, from Sir William McAlpine to Richard Branson’s daughter and Paul Costelloe in Windsor.

“I have done lots of shop signs around Henley and pictorial work for pubs, but much of it is gone now as the shops have closed.”