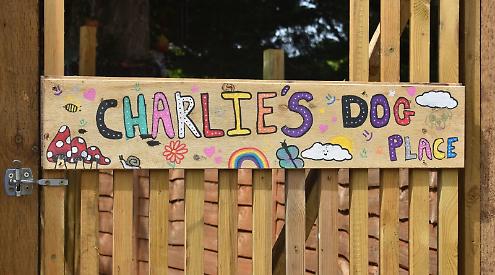 A TELEVISION presenter visited a dog care centre in Sonning Common as a surprise for the owner, writes Marianna Casal.

The visit was organised by Mike Woods, 76, who has been a customer of the business since it opened last year.

Mrs Ilsley already owned Charlie’s Place at the family’s home in Buckingham Drive, Emmer Green, when she took over the former Doggy Dips in Kidby’s Yard.

Mr Hall said: “I heard about Charlie’s story and I just wanted to help out because I’m in a position these days where I can just come and say ‘hi’ to somebody and have a few pictures taken and help them out so why not?

“It’s really nice that I can make people’s day by just being me — what a privilege.

“It’s a great set-up here — it’s well organised, the dogs seem lovely and Toni has really thrown herself into it and done everything right. What a great place.”

Mrs Ilsley said Charlie would have loved to have met the TV personality.

“He’s a really lovely man,” she said. “He made my day. This is one of the loveliest things that’s happened since we’ve been here.” Mr Woods, who has lived in Sonning Common for 54 years, contacted Mr Hall’s secretary to see if he would visit as a surprise for Mrs Ilsley.

He said: “She really deserves it. It’s fantastic here. One happy dog comes home every night and everyone who works here is so lovely.” The business offers day care, dog walking and overnight stays and accommodates dogs with different needs.

Charlie, a pupil at Highdown School in Emmer Green, had fought cancer since 2015 when he was diagnosed with a brain tumour and was twice given the all-clear after treatment.

He had two dogs, Ernie, a shih tzu bichon frise cross, and Eric, a lhasa apso.

While he was in Mexico for treatment in the week before he died, he and his family stayed at a ranch that had rescued a dog and Charlie told his family that he wanted to work with dogs when he was older.

Mrs Ilsley left her job at Prospect Park Hospital in Tilehurst to run both dog centres full time. She is a qualified dog trainer and is now taking an online degree course in dog behaviour.